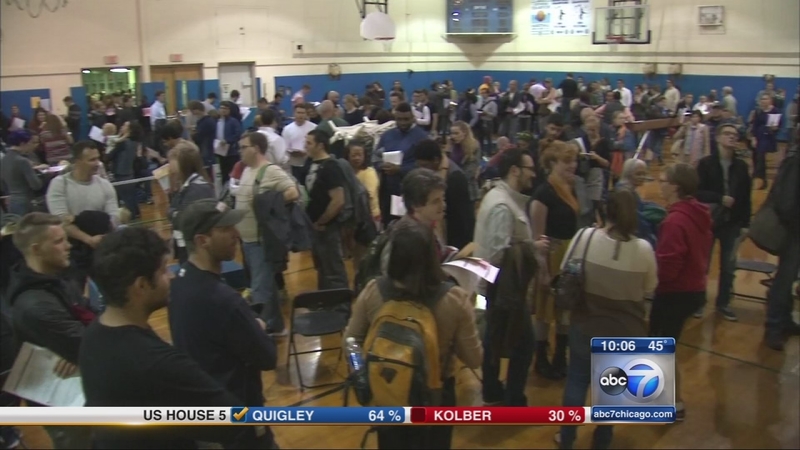 Long lines at some Chicago locations

CHICAGO (WLS) -- A slow start and finish for some polling locations in Chicago after judges failed to show and Illinois' first same-day voter registration backed up for hours on Election Day.

Some Ravenswood residents who needed to register to vote before casting their ballots on Election Day waited in line for seven hours. Many said they just didn't have time to register before Tuesday.

The location at a community center on Sunnyside was one of five locations across the city offering same-day voter registration. All five were busy, election officials said, far surpassing the expected demand.

"Tired," Emily Knight said. "Everybody has to work tomorrow. But nobody's giving up." 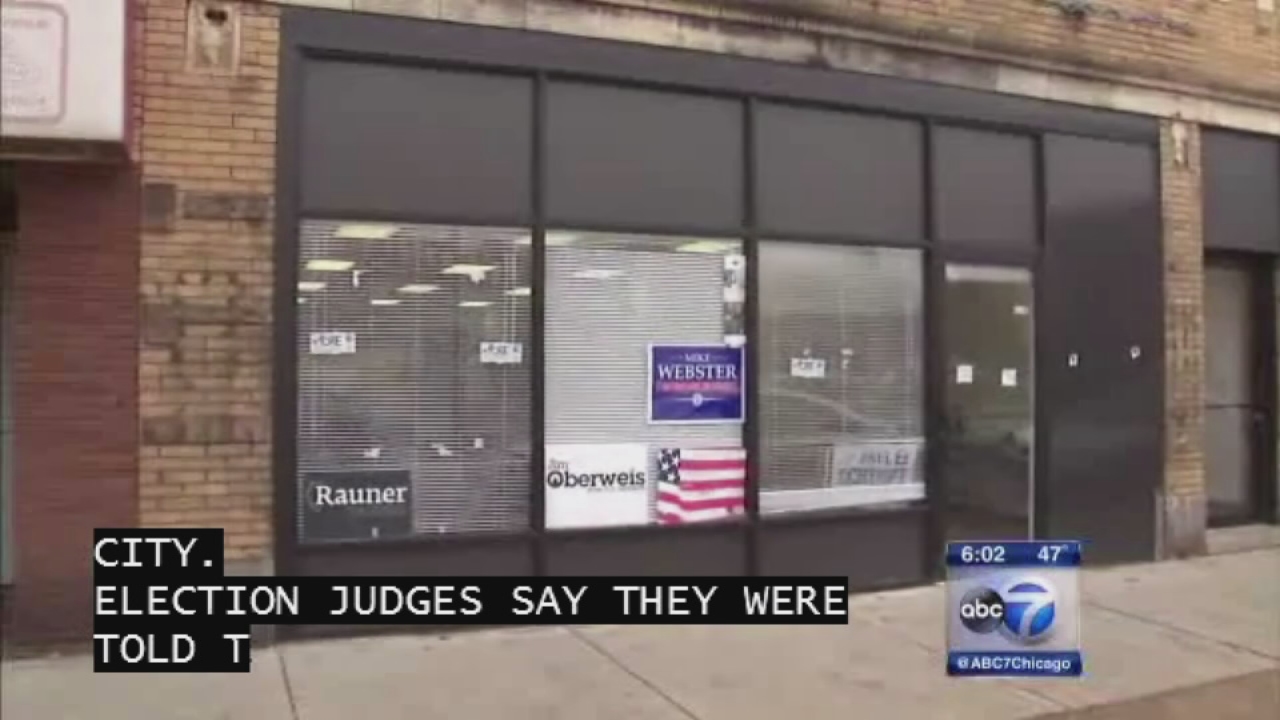 Robocalls before Elections 2014 investigated
A slow start and finish for some polling locations in Chicago after judges failed to show and Illinois' first same-day voter registration backed up for hours on Election Day.

Chicago Mayor Rahm Emanuel visited the location to encourage voters to stick it out, and the alderman passed out pizza. 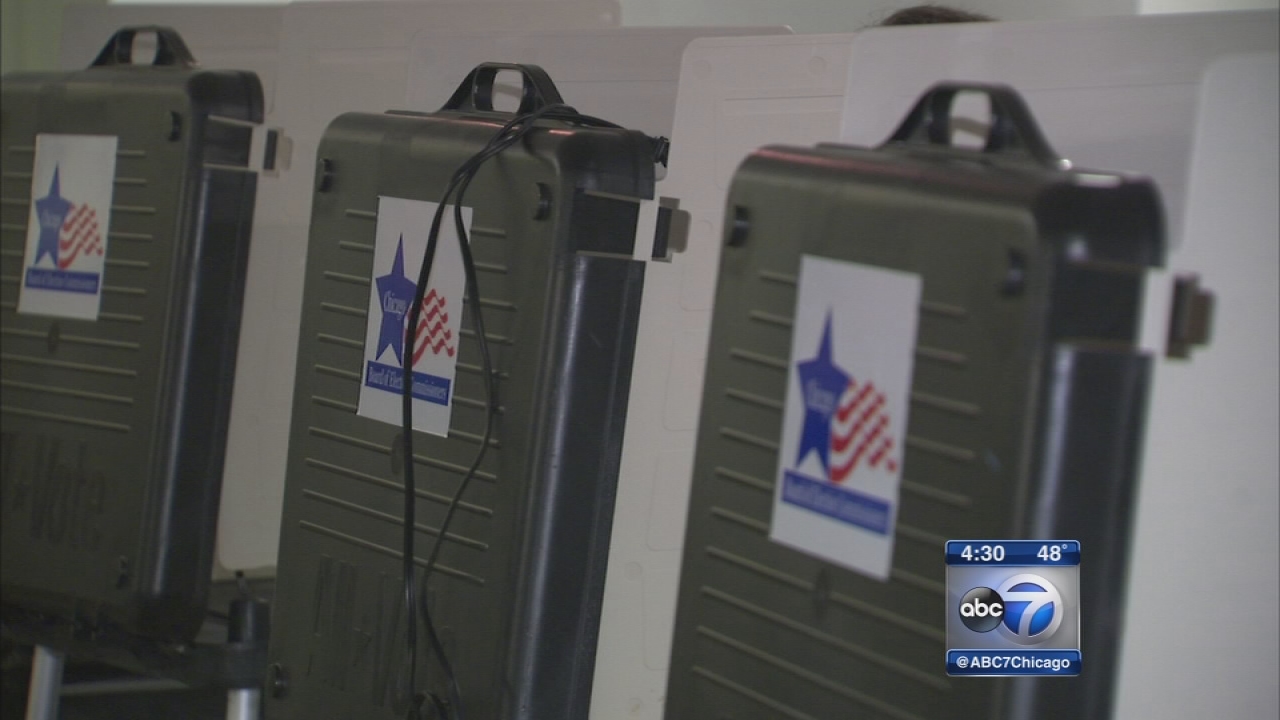 Dirty tricks?
A slow start and finish for some polling locations in Chicago after judges failed to show and Illinois' first same-day voter registration backed up for hours on Election Day.

Officials said all who were in line by the closing time of 7 p.m. will be allowed to vote.

"One of the judges came out and said there are only two of them. Three of them did not show up. And then the one lady inside had a meltdown," Edward Sung said.

"The polling lady was crying, which I understand this is very stressful. But you know this was supposed to start an hour and 45 minutes ago. So they should have been prepared two hours before that," Carla Penicka said.

A number of city election judges received "intimidating" phone calls over the weekend that led some of them to quit the post, according to officials at the Chicago Board of Elections. More than 2,000 judges didn't show up on Tuesday, Jim Allen said.

"Sometimes all it takes is a call like that to convince them not to show up," Langdon Neal, Chicago Board of Elections chairman, said.

Neal said dozens of party-affiliated judges who help oversee polling places received calls instructing them to attend additional training sessions. The callers also told them to only vote for the party for which they serve as judges.

"We faced a problem with a malicious attempt yesterday, reaching out to our judges telling them (that) unless they served another three hour session at the training facility they could not serve today. Many of our judges resigned immediately," Neal said.

Neal says city officials sent an email to approximately 6,000 judges Sunday urging them to ignore the calls. He says judges who have already undergone training do not have to take part in more training. He emphasized that their votes are secret.

Allen said the calls came from one party, but that information would not be released on Election Day. Officials are seeking an investigation.

"This one is a new dirty trick," Allen said of the calls.

The ABC7 I-Team learned Tuesday that some Chicago election judges were told in the false calls to report to a Cook County Republican Office on the Southwest Side for additional "training." When the I-Team arrived there, a man who said he is the landlord told him the GOP staff had just packed up and left. However, a Republican operative who worked there said he made personal calls to judges, too.

"Asked them, have they had their training yet? I mean, you know, the training for the judge. And then ask them had they voted early and if not tell them that they have until Saturday, this past Saturday, to vote early," the man said.

Robocalls also directed election judges to an address on 79th Street near another GOP office, where the deputy chairman of the Cook County Republican Party said they had a training session on Sunday.

"Both parties have meetings with their election judges to work the polls, work the precincts," Darnell Macklin, vice chairman of the Cook County Republican Party, said.

Despite the delay, some determined voters waited it out.

Eventually, the polling station opened with the judges they had available. However, the precinct was still constructing booths when the voting began and incomplete ballots were also handed out to the first few voters.

Allen said the city also ran into the problem with voters needing two ballots four years ago, despite the training. At one location, the investigator found the second ballot in the election supply carrier. Voters who only voted with one ballot and left the polling place cannot return to fill out the second ballot.

"I don't really have a lot of faith right now that what I actually voted on will get counted," Penicka said.

Sung believes his vote will count. He and three others shared a cab downtown to the Board of Elections to cast their ballots there. 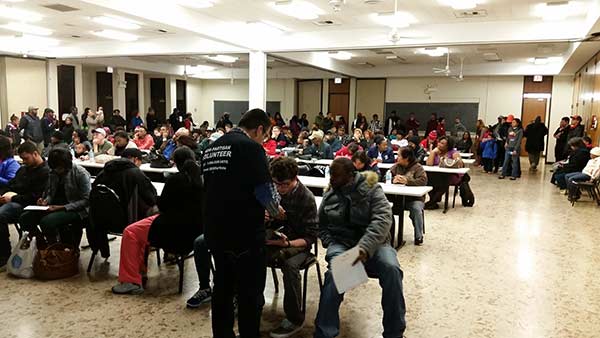 At another location that's staying open late, the owner of Leona's Restaurant in Rogers Park didn't show up at 6 a.m. The Chicago Fire Department was called. Crews broke a window pane on the door to gain access. That poll opened one and a half hours late.

At the Board of Elections, 69 West Washington, people were allowed to register and then vote, a first in Illinois on Election Day. The line stretched around the basement, but some people waited for two and a half hours.