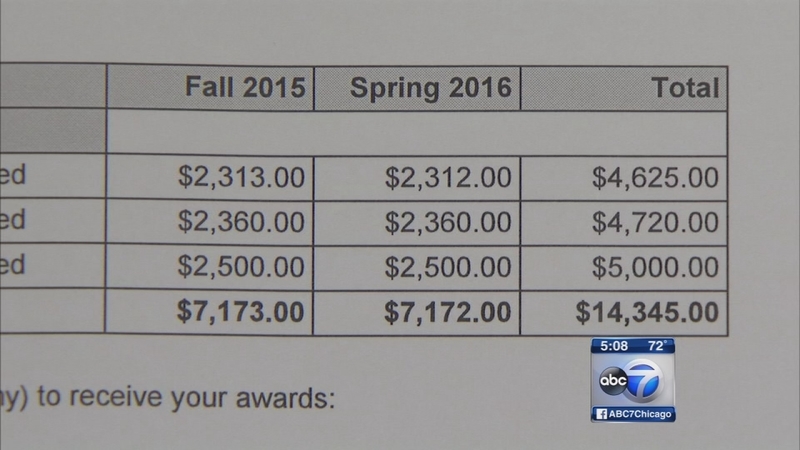 CHICAGO (WLS) -- Right at the start of the new school year, some Illinois college students are being forced to find other ways to pay for their education.

The state's ongoing budget impasse is being blamed for stalled payments to the Monetary Award Program (MAP); a program that 130,000 students in Illinois rely on for funding tuition assistance.

At UIC, fourth-year accounting major Sylwia Sokolowski believed the mailed, written confirmation that the state would pay nearly $5,000 of her tuition made the so-called MAP grant a done deal.

"Now I find out that it might not be such a done deal, that maybe the state still has the option of taking it away from us?" Sokolowski said.

"Nothing appropriated means I might not get that money and not getting that money, I don't know, I don't know what I'm going to do this year," Sokolowski said.

Over 130,000 students at public and private colleges are due to receive Illinois MAP grants this semester. If the money is not appropriated by the end of September, the institutions could demand it immediately, meaning students would have to take loans or find other means to pay.

"They maybe haven't told students like Sylvia, who is now in a situation where she doesn't know how to make this decision," said Sarah Labadie of Women Employed.

In May, the General Assembly appropriated money for MAP grants in its budget, but Rauner vetoed the spending plan that he said was $4 billion short of money needed to pay for it. Caught in the middle are grant recipients.

"A lot of them are going to make the choice that they are not going to rely on the governor and lawmakers to fix the budget and will decide they're going to drop out," said Emily Miller, Voices for Illinois Children.

"Dropping out is not an option for me because I have a full-time job offer lined up for the summer and I have to finish my degree in May," Sokolowski said.

"If they get the MAP grant taken away, then I don't know if they'll continue to go to school if they're already struggling this much with the MAP grant," she said.

The Illinois Senate has passed a special appropriations bill for the MAP program. The House will consider it next week but there's no guarantee that Rauner will sign it.