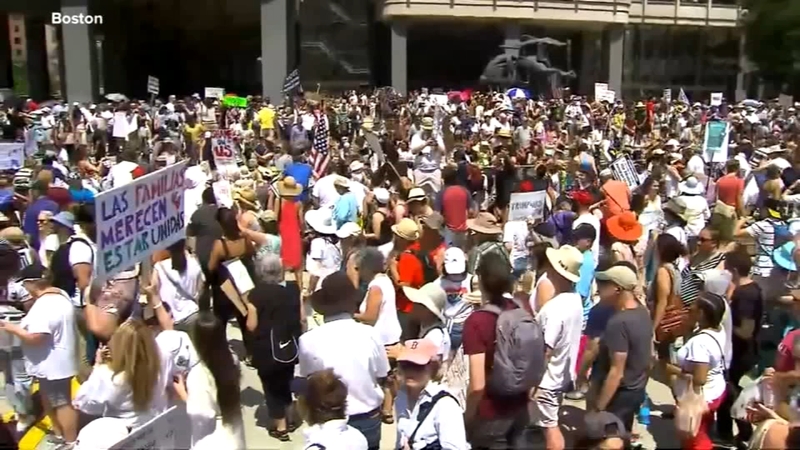 Protesters gather across the country to criticize Trump's immigration policy

CHICAGO (WLS) -- Thousands took to the streets in Chicago and across the nation to protest President Trump's immigration policy Saturday.

Protesters gathered in Daley Plaza Saturday carrying signs reading, "Families belong together" and "No hate. No fear. Immigrants welcome here." The protesters want the Trump administration to reunite parents with their children as quickly as possible.

The Chicago Police Department estimates that 50,000 people turned out for the march, making it one of the largest in the nation. So many marchers participated that those at the front of the march returned to Daley Plaza before those at the end had left.

The protesters began gathering in Daley Plaza at about 11 a.m. for a rally and then began marching through the Loop after noon. Some protesters marched to the U.S. Immigration and Customs Enforcement (ICE) Chicago field office and set up tents.

Mothers with children in detention spoke to the crowd through interpreters and asked for the swift reunification of families. Children of immigrants also spoke out.

Candice Castillo, herself the child of immigrants, said her son Jaden, 7, asked to come to the march despite the heat "because people need their families."

As of last week, at least 66 separated minors were said to be housed in shelters across the Chicago area. According to the non-profits that run those shelters, relatives have been located for approximately two-thirds of those children.

It is unclear if those children have been reunited with their relatives.

More than 700 planned marches drew hundreds of thousands of people across the country, from immigrant-friendly cities like New York and Los Angeles to conservative Appalachia and Indiana to the front lawn of a Border Patrol station in McAllen, Texas, near a detention center where migrant children were being held in cages.

There, people held American and Texas flags and signs depicting a migrant father, mother and child as the Holy Family with haloed heads traveling through the desert.

"It's important for this administration to know that these policies that rip apart families -that treat people as less than human, like they're vermin- are not the way of God, they are not the law of love," said the Rev. Julie Hoplamazian, an Episcopal priest marching in Brooklyn, whose own grandparents fled to the U.S. during the Armenian genocide.

"Jesus was a refugee," she said.

In Washington, a massive crowd gathered in Lafayette Park across from the White House in what was expected to be the largest of the day's protests.

Lin-Manuel Miranda, the creator of the musical "Hamilton," sang a lullaby dedicated to parents who are unable to sing to their children. Singer-songwriter Alicia Keys brought her 7-year-old son, and read a letter written by a woman whose child had been taken away from her at the border.

"It's upsetting. Families being separated, children in cages," said Emilia Ramos, a cleaner in the district, fighting tears at the rally. "Seeing everyone together for this cause, it's emotional."

Around her, thousands waved signs: "I care, do you?" some read, referencing a jacket the first lady wore when visiting child migrants amid the global furor over the administration's zero-tolerance policy that forced the separation of more than 2,000 children from their parents. Her jacket had "I really don't care, do U?" scrawled across the back, and that message has become a rallying cry for Saturday's protesters.

Trump took to Twitter on Saturday morning to show his support for Immigration and Customs Enforcement amid calls from some Democrats for major changes to immigration enforcement.

Tweeting from New Jersey, Trump said that Democrats "are making a strong push to abolish ICE, one of the smartest, toughest and most spirited law enforcement groups of men and women that I have ever seen." He urged ICE agents to "not worry or lose your spirit." 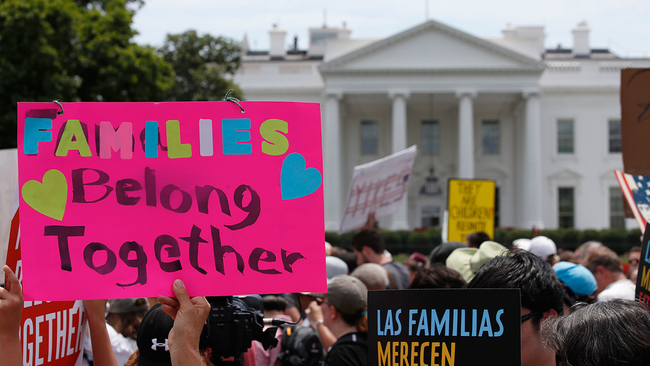