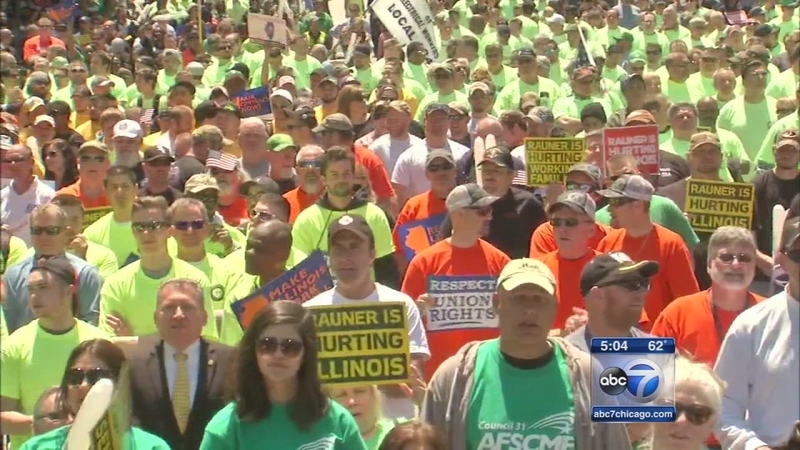 SPRINGFIELD, Ill. (WLS) -- Thousands of union members and supporters took part in a march and rally in Springfield protesting the governor's proposed changes to collective bargaining.

Capitol police estimated the crowd at 8,000, many bussed here from the Chicago region, who marched and rallied against what they called Governor Bruce Rauner's efforts against organized labor.

"Rauner wants to change things dramatically and he wants to do it on the back of labor," said Mike Ohlrich of New Lenox.

"His bigger agenda is to make us look bad, to take away everything we worked for all this time. It's terrible," said Keith Hawkins of Kankakee.

"We think you do a good job," said Illinois Senate President John Cullerton, Democrat, to the crowd.

Cullerton and House Speaker Mike Madigan, both Democrats, left their chambers to join the rally. Madigan alleged the Republican governor is trying to make Illinois an anti-union, "right to work" state.

"Governor Rauner wants Illinois to go 'right to work.' How do you feel?" Madigan asked. The crowd booed in response.

Inside the capitol, Madigan's House Democrats are pushing another bill to remove Rauner from contract negotiations with AFSCME, the largest state worker union.

"This governor is looking out for taxpayers and the public sector unions are fighting that," said Ron Sandack, a Republican state representative from Downers Grove.

Last year, Democrats fell short of a needed supermajority to override the governor's veto of a similar measure. Republicans vow to continue their opposition.

"I do not believe there will be a Republican vote in favor of overriding our governor," said, Sandack.

AFSCME members were joined by trade unionists as well as other public sector workers in the biggest Springfield demonstration so far this session.

The governor was not here to see any of this Wednesday. He spent the day in the St. Louis Metro-East area and Southern Illinois.