PLAINFIELD, Iowa -- An undocumented immigrant and his two children -both naturalized U.S. citizens - confronted Republican presidential hopeful Scott Walker in his hometown of Plainfield, Iowa, over the weekend, asking the Wisconsin governor why he would want to break up their family.

Jose Flores' daughter Leslie, 13, asked that question of Walker as he approached and shook her father's hand.

"The fact is we're a nation of laws, and unfortunately the president last year after saying 22 times before last year that he couldn't make the law himself, he said he wasn't the emperor, he was the president of the United States, and he couldn't change the law - he decided to change the law even though the courts announced that you can't do that. So my point is you've got to follow the law and follow the process. I completely sympathize with the situation you're all in and others are in," Walker said.

The Flores family resides in Waukesha, Wisconsin, where Walker said his nieces go to elementary school, too. The family was confronting Walker over his opposition to the expansion of consideration of Deferred Action for Childhood Arrivals, or DACA, which allows some undocumented immigrants to stay in the country. Walker is part of a lawsuit fighting DACA.

"We've got to enforce the law and then we go forward with a legal immigration system that puts a priority on families here in America, whether they're born here or come here from somewhere else legally, that puts a priority on American working families and their wages," Walker said. "I completely sympathize, but... the president said he couldn't do what he did. No one is above the law. That's the beauty of America. No man or woman can do something on their own, whether the president or somebody else, they don't get the right to make the law when there's a process of going through Congress."

Flores' 7-year-old son Luis was next to confront the governor.

"Do you want me to come home and come from school and my dad get reported?" Luis asked, intending to ask about his dad being deported.

"No, that's not what I'm talking about," Walker responded. "My point is that in America, no one is above the law, the president can't make the law just because he said he could and so one of the things that all of, particularly kids in school, is that the process is a president and Congress have to work together."

The father and daughter then point-blank ask Walker to drop the Wisconsin lawsuit blocking DACA, and Walker responds by saying the president is not above the law.

Walker then ends the discussion as someone in the crowd shout "Do you support DACA?" at him.

After the discussion, the Flores family talked to reporters and said an advocacy group paid for them to travel to Iowa to talk to Walker.
Related topics:
politicsiowawisconsinimmigration reformpresidential raceu.s. & worldimmigrationcaught on camera
RELATED 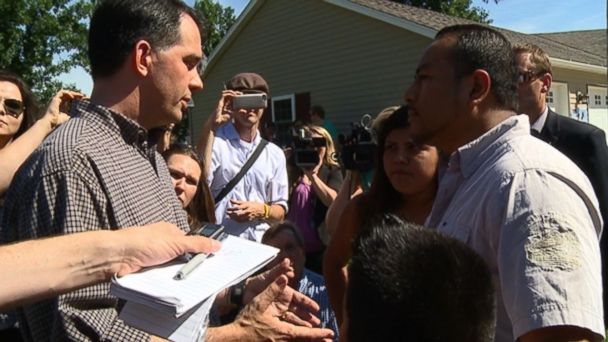