Website asks: Where are female candidates for Ill. governor? 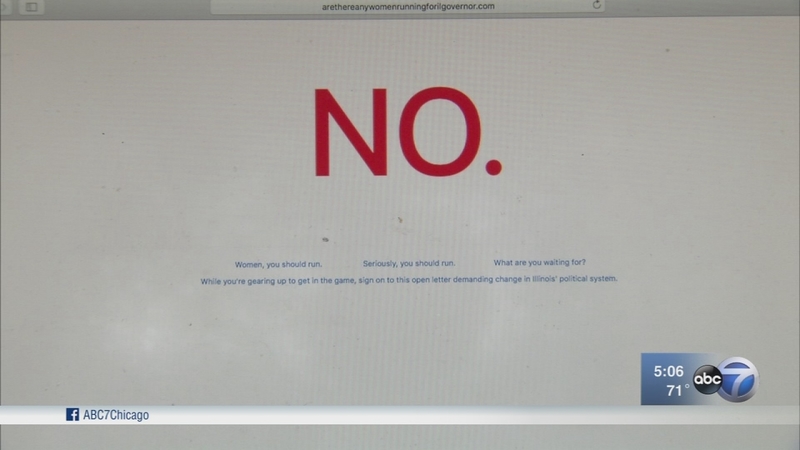 Website asks: Where are female candidates for Ill. governor?

CHICAGO (WLS) -- A new website is dedicated to getting women to run for Illinois governor.

Taking a look at the field of Democratic candidates running for governor, all of them are men and six of them are white. Despite women's marches and the push to run for public office so far, no women plan to challenge Governor Bruce Rauner.

"Illinois is a blue state, strong Democratic Party leadership, we should be leading the way. Instead we are lagging behind and that is a problem," said political strategist Joanna Klonsky.

Klonsky and a group of women activists have started a website called arethereanywomenrunningforilgovernor.com. The site drives women to organizations that support female candidates and encourages women to sign an open letter to the Illinois Democratic Party.

"Part of the goal of the site and the sort of the initiative is to encourage the leadership of the Democratic party of Illinois to create more of that pipeline to run for office," Klonsky said.

Illinois has never had a female governor. The late Judy Baar Topinka, a Republican, was the last female nominee for governor. She lost to Rod Blagojevich.
Political strategists say both Illinois political parties do a lousy job of encouraging and supporting women to run for statewide office.

Women like State Senator Jacqueline Collins, D-Chicago, who says she has no interest in being governor. Collins says the cost of a campaign, especially when there are billionaires in the race, keeps many women from running for higher office. She says women only run when they are asked several times.

"Most men nominate themselves to run or are eager to run I think more for a power issue, an ego issue, but women run to make change," Collins said.

Collins says until money is taken out of the elected process, it will be tough to recruit women for higher office, unless the party gets behind them. The 2018 Illinois governor's is expected to be the most expensive in state history.