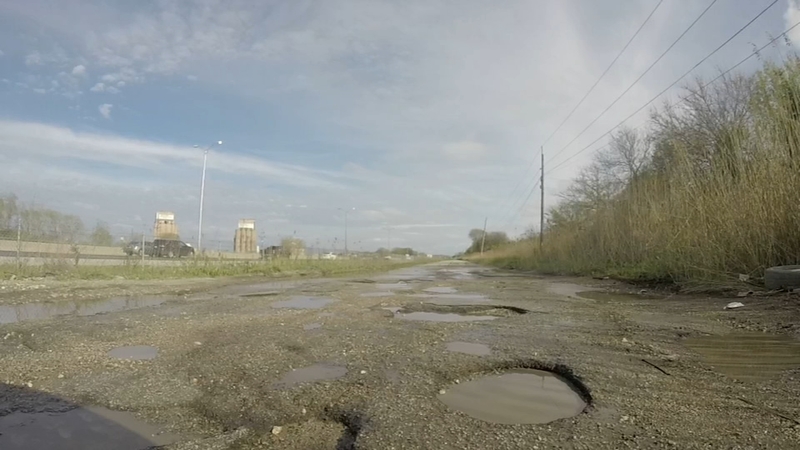 South Side drivers struggle with 'extreme' potholes on Doty Avenue

CHICAGO (WLS) -- One driver in Chicago's Riverdale neighborhood contacted the ABC7 I-Team asking for help, saying the city of Chicago wasn't patching the deep potholes on their street quickly enough.

Phyllis Gutherie said the issue has been ongoing for five years, and is demanding the city find a long-term solution.

"You're going to see and feel the bumps," Gutherie said as she took Consumer Investigative Reporter Jason Knowls down her road.

It may feel like an off road adventure, but it's a city street.

Guthrie dodged dozens of potholes, crater after crater thanks to recent heavy rain which has made matters worse.

"We have learned to try to navigate where we are not to that side, the one hole here does have rebar," sshe said.

Guthrie works at Boasso Global Trucking, one of the businesses located near pothole-plagued Doty Avenue, a service road which runs along the Bishop Ford. Employees have even started a collection of rebar which comes loose after the potholes open up.

"I am still waiting on the road to be repaired," Guthrie said. She showed the I-Team several complaint emails to the City of Chicago which she's been sending since March. "My safety means something to me as well as my drivers."

In May Guthrie included the I-Team on one of those emails, and they replied letting the city know we would look into the problem. The day after the I-Team recorded footage of the potholes, Guthrie said crews patched dozens of the holes. But that's not the end of the story.

"They promised they were going to fix this road, repair it," she said. "They put a band aid on it, it all needs to be torn out and repaved."

Five years ago, in June of 2014, the I-Team exposed the same problem: about 50 potholes on Doty Avenue. City officials said they had to figure out a "long-term repair solution" for the old road, which has improper drainage and said "...the ultimate answer for that road is reconstruction"

"No matter what way you go, you still have to go this slow unless you want to bottom out," Guthrie said.

The Chicago Department of Transportation said it will perform maintenance until the money can be found to reconstruct the roadway. CDOT said it has filled about 1,500 potholes on Doty Road alone this season.

The city added that extra pothole patching crews were dispatched everywhere this season, because of "extreme weather conditions."

If you have a pothole problem in your neighborhood. Call 311 or email the city. You can also click here to report potholes online.

FULL CDOT STATEMENT
In response to a harsh winter marked by extreme swings in temperature and heavy precipitation, City crews have been working hard to repair our roadways, filling more than 475,000 potholes across Chicago this year to date. The Chicago Department of Transportation (CDOT) has dispatched extra pothole patching crews around the city as a result of the extreme conditions, and has filled about 1,500 potholes on Doty Avenue alone this season. The department will continue to monitor and perform maintenance on Doty Avenue until funds can be identified to complete a reconstruction of this roadway.