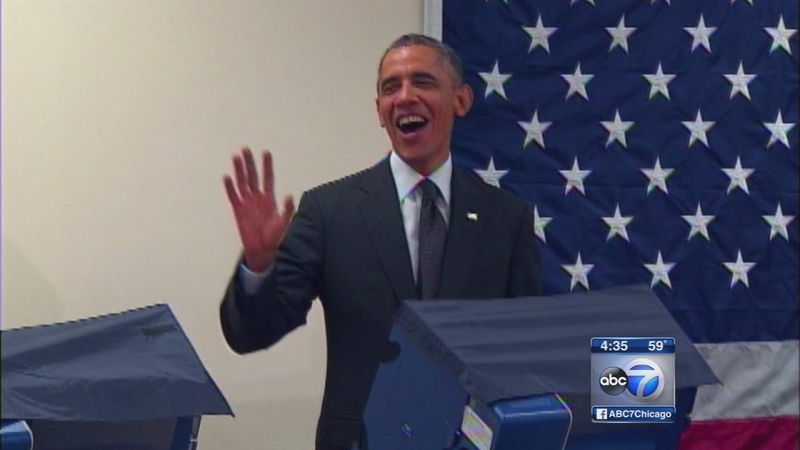 CHICAGO (WLS) -- President Barack Obama is attending a private fundraiser for Democrats in Chicago on Monday evening after he voted early for the midterm election.

"We let two people go in front of us and we didn't think anything of it and we got in there, he was there," Cooper said.

Because it was quiet and everyone was staring at the president, Cooper's fianc Mike Jones decided to break the ice and joke with Obama.

"On my way past him, I said, 'I know you are the president, but don't touch my girlfriend,' and he laughed," Jones said.

Obama not only laughed, he proceeded to joke with Aia during the whole voting process, promising her he was going to get her fianc back - and the president did.

After about 20 minutes, Obama was off. He made an impromptu stop at Gov. Pat Quinn's South Side campaign office. Sunday night at Chicago State University, the president helped launch a get out the vote effort to get Democrats to the polls to vote for Quinn. The governor remains in a tight race against Republican Bruce Rauner. The presidential visit was a welcome surprise for Quinn volunteers.

"We all had a chance to talk to him and let him know what we were doing, what our interests were. He was really interested, asking people a lot of questions," said Kristiana Zerom.

Obama is attending a fundraiser on Chicago's North Side then is expected to fly out of O'Hare at 6:30 p.m. Monday night.