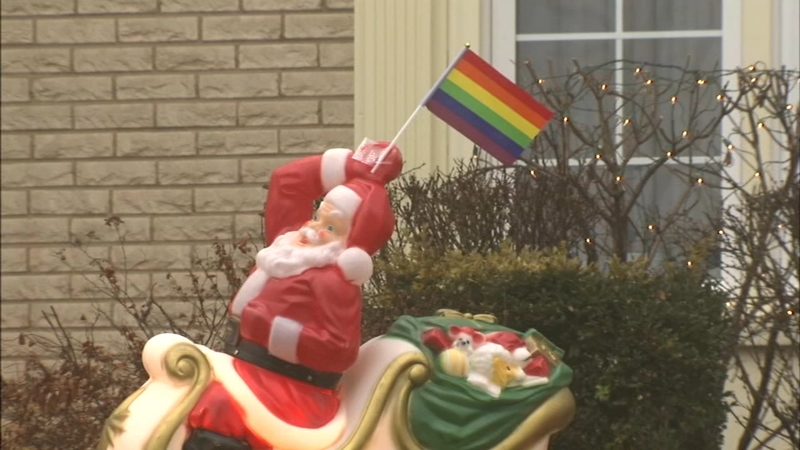 BARRINGTON, Ill. (WLS) -- The theft of a Barrington family's gay pride flag has led to a heartening show of support from neighbors for a family that is new to the neighborhood.

Now there's one on the mailbox, and another in a planter. Down the street they line a house's front yard. Even Santa is flying the rainbow flag.

The flags are all in support of Casey Handal and her family, who live in the neighborhood.

"The outpouring of support was just immediate. Everyone said they are so sorry, this is not reflective of our community," Handal said.

Handal had a large rainbow flag flying from her flagpole in the back yard until a couple weeks ago, when someone stole it and replaced it with an American flag.

The family has only lived in the neighborhood for six months, and she said it was frightening.

"I was astounded this happened in our neighborhood, just around the corner from here. It was just so disturbing to me and it made me angry," said Filian.

It's turned what started out as an ugly demonstration of hate into a heartwarming story of support and inclusion.

"There are bad people in the world and you need to watch out for them but ultimately there's a lot more good in the world than there is bad," said Handal.

At first Handal thought about not replacing the flag and just leaving the pole standing without one, but the family decided that would send the wrong message. They are thrilled to find out how many of their neighbors agree.
Report a correction or typo
Related topics:
barringtontheftcommunitylgbtflags
Copyright © 2022 WLS-TV. All Rights Reserved.
TOP STORIES
Chicago weather forecast includes snow into Monday | Live radar
Girl, 8, killed by stray bullet ID'd: ME
6 found dead inside Milwaukee home, authorities say
5 tax changes that can boost your refund this year
Family demands justice after 23-year-old woman found dead after date
COVID mandate draws protestors rallying against proof of vaccination
$45K raised for Bradley officer recovering from deadly hotel shooting
Show More
$6M worth of cocaine laced with fentanyl seized in Wisconsin
Chicago Weather: AM snow, mostly cloudy Monday
Woman killed in 'targeted ambush' at her birthday party in CA
Police lift SUV to rescue woman, 70, pinned underneath: VIDEO
US draws down Ukraine embassy presence as war fears mount
More TOP STORIES News