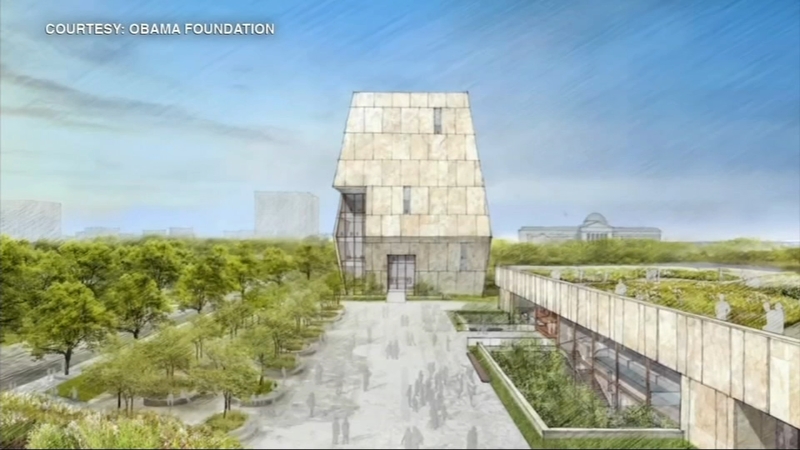 Property taxes, rent could rise due to Obama Center: Report

CHICAGO (WLS) -- A new report from the University of Illinois Chicago said if the city doesn't act quickly, many people could be priced out of their homes as new development starts around the Obama Presidential Center in Jackson Park.

"Living in affordable housing has really been a race," said Woodlawn resident Tara Madison. "I've been living in community to community as developments come in and rents skyrocket."

Madison said she's had to move to three different neighborhoods over the years before settling in Woodlawn just to find affordable housing.

"I've been able to raise not only my two children but my grandchildren as well, and give them the same quality of life I enjoyed as a child living in Old Town," Madison said.

She's afraid that all could change with development around the proposed Obama Presidential Center.

"We're proud of the President here in the community, but we know when developers come we can get priced out. That's when we get nervous and uncertain," she said.

According to UIC Professor of Urban Planning, Janet Smith, with the Nathalie P. Voorhees Center for Neighborhood Community Improvement, that fear is becoming a reality.

"I'm talking significant differences. Units that have been rehabbed will go up maybe $300 or $400 more a month, and units that are new construction can be twice the rents that many of the residents are paying," she said.

Those price increases are just for renters.

According to the report, in the roughly two around the Obama Presidential Center, most renters and many homeowners are already paying more than they can afford in monthly housing costs.

Rents are going up and becoming unaffordable for people who live there.

Evictions in the area are higher than the city average, and rising home values may affect property owner's ability to pay their taxes.

Ashley Giles Perkins with the Obama CBA Coalition wonders what her future in the community looks like.

"Income is not up. And with that dynamic, we're only going to see more pushout and we'll see an overall deterrent of young families," Perkins said.

20th Ward Alderwoman Jeanette Taylor said 30 percent of new housing should be affordable, and building on city and county owned lots could help.

"If the city is serious about protecting low income and working families in this community we should have no problem getting it signed," she said.