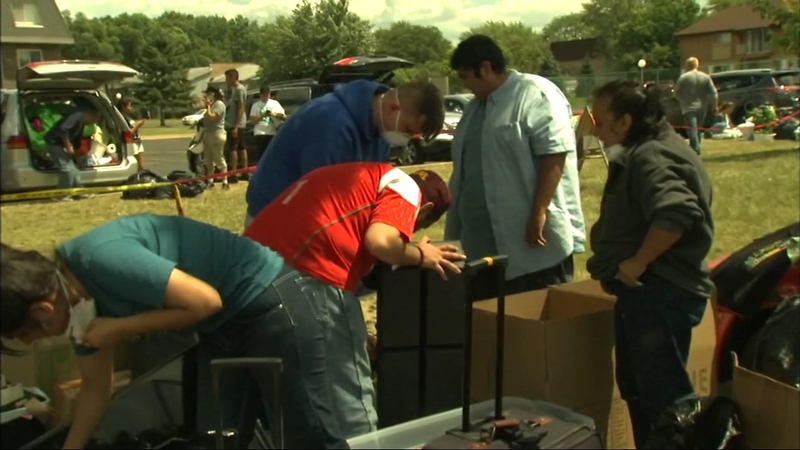 PROSPECT HEIGHTS, Ill. (WLS) -- Families in Prospect Heights are still trying to pick up the pieces after a huge fire destroyed their suburban condo complex on July 18.

Residents were allowed back inside their burned-out condos in Prospect Heights Thursday to remove any belongings that can be saved. They get a couple of hours inside the building to walk away with whatever they can salvage from their units.

The massive fire that destroyed 96 condo units last week is estimated to have caused $10 million in damage.

A small pile of items on the grass. Some photos and other possessions. For most residents of the River Trails condominiums these piles represent all they have. It is all they have left after the fire that destroyed their homes late last week. For some this is the first time they have been able to go into the building. There is not much left.

Teresa Hernandez was able to save some of her Disney princess doll collection. Her family lost much, but are grateful no one was hurt.

"Even though it's been a week now, it still feels like a nightmare for everybody," said fire victim Teresa Hernandez.

People living there questioned why it took firefighters so long to start putting it out.

Investigators have determined the fire was accidental, caused by a juvenile in one unit. But it quickly spread and firefighters say their efforts were hampered by a number of factors including: the lack of a road on the west side of the complex that firefighters could access; a tall fence separating the apartments from the park; and the lack of sprinklers in the complex which investigators say could have limited the fire to one unit.

Families in Prospect Heights are still trying to pick up the pieces after a huge fire destroyed their suburban condo complex on July 18.

Meanwhile the local police department is helping to lift the spirits of children who were affected.

Some of the campers at the Prospect Heights Police Department summer outreach camp are recovering from a devastating loss.

The Prospect Heights Police Department runs a summer outreach program every year and Thursday they were taking campers to Medieval Times then to a water park, lifting spirits in a dark time for some of them.

"A lot of them are upset about the fire that they've lost everything so we're just trying to make sure that as many families get what they need, the resource that they need," said Officer Deol.

The fire was started accidentally by a boy playing with a lighter in one of the units. Fire investigators found no criminal intent.

No one was seriously hurt in the fire on July 18, but hundreds of people lost everything like Asael Villa who was celebrating his birthday that day. His family and other families are being allowed back Thursday to get some of their belongings.