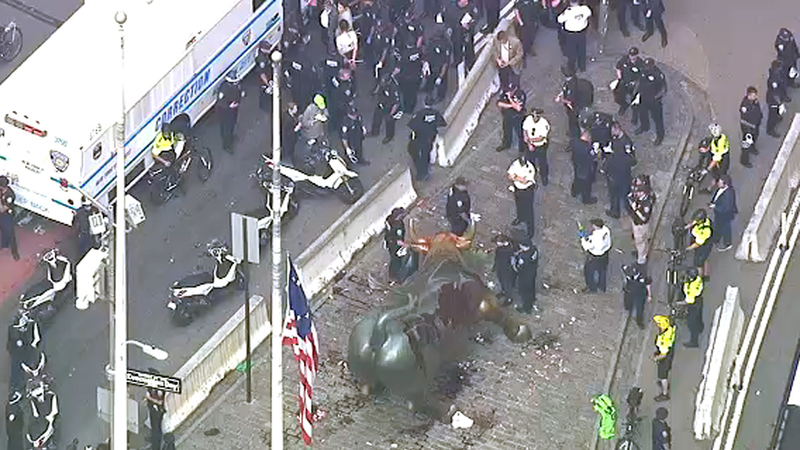 Authorities say the protesters surrounded the iconic statue and threw red paint on it to symbolize blood and extinction. Twenty-six people were arrested on the scene.

The protesters also held a die-in near Broadway and Pine Street, where they feigned death to draw attention to what they say is a dire situation. Officials say 59 people were arrested at that scene.

Additionally, eight others were arrested by the Stock Exchange.

The "Extinction Rebellion" rally is part of a global network of protests and events this week to raise awareness of what they call the climate crisis' potentially disastrous effects.

Similar protests are taking place around the world -- including in London and Australia.

The group that organized the protests around the world wants to achieve net zero carbon emissions by 2025.

"Look, we absolutely apologize to anyone who is personally inconvenienced by our actions. We don't want to be here. We don't want to disrupt people's lives. What we want is for the government to act. We have tried so hard within more regular means and it hasn't been successful, so we feel that we've been pushed extraordinary action," said Extinction Rebellion Sydney spokesperson Elly Baxter.

Those participating in the rallies said they knew they faced the possibility of being arrested.

A reporter in London asked one of the protesters if they knew an arrest could alter the rest of their life.

"Yeah I know, but if we don't do anything, the rest of my life is going to be altered anyway, for the worse, so I need to do something now, really," the protester said.