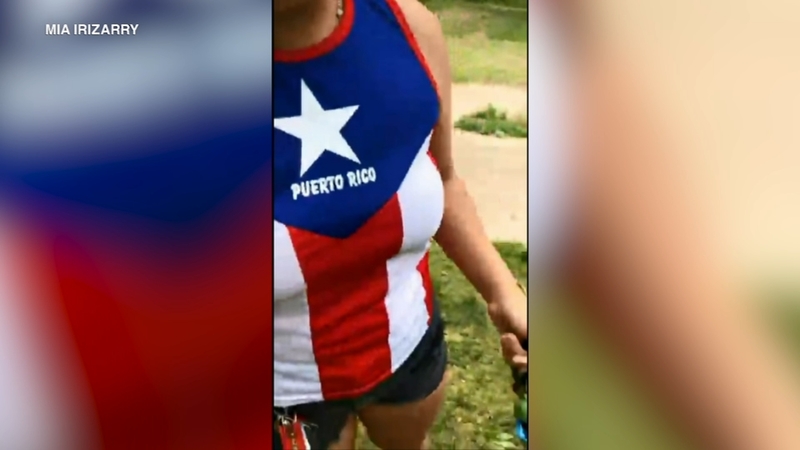 COOK COUNTY, Ill. -- An Illinois park is investigating after a woman accused one of its police officers of standing by as a man harassed her for wearing a shirt with the Puerto Rican flag, saying it was un-American.

Mia Irizarry says she was trying to celebrate her 24th birthday in the Forest Preserves of Cook County last month when the man approached her asking her why she was wearing the sleeveless Puerto Rico flag shirt, which also had "Puerto Rico" written below the V neckline.

Irizarry recorded the encounter on her phone, saying she felt threatened, and posted the video to Facebook.

On Monday, Forest Preserves of Cook County tweeted that it was aware of the June 14 incident and video.

"After the incident, we immediately launched an investigation pursuant to our personnel policies into the response of our officer," it said, in a series of posts on Twitter. "The investigation is ongoing and the officer involved has been assigned to desk duty pending the outcome. The intoxicated individual involved in the incident was arrested and charged with assault and disorderly conduct.

"All people are welcome in the Forest Preserves of Cook County and no one should feel unsafe while visiting our preserves."

We are aware of the the June 14 incident and video. After the incident, we immediately launched an investigation pursuant to our personnel policies into the response of our officer.

All people are welcome in the Forest Preserves of Cook County and no one should feel unsafe while visiting our preserves.

The investigation is ongoing and the officer involved has been assigned to desk duty pending the outcome. The intoxicated individual involved in the incident was arrested and charged with assault and disorderly conduct.

Cell phone video shows a Cook County Forest Preserve police officer standing by while a woman was harassed by a man for wearing a Puerto Rican flag shirt.

Officials said the man in the video, identified by authorities as Timothy Trybus, 62, has been charged with assault and charges could be updated and could possibly include a hate crime.

"The officer should have stepped in and should have done something and he did not and that's the reason we're here today," said Cook County Forest Preserve Police Chief Kelvin Pope.

In the footage, the man can be seen approaching Irizarry saying: "You should not be wearing that in the United States of America." He gets closer to her and asks "Are you a citizen? Are you a United States citizen?"

Irizarry can be heard saying that Puerto Rico is part of the United States and the man approaches her multiple times.

Irizarry asks a park police officer to help, saying "I am renting this area and he's harassing me about the shirt that I'm wearing."

Later she says: "Officer, I feel entirely uncomfortable, can you remove ... please officer" as the officer is seen walking away from her.

Then she says: "Officer, I'm renting, I paid for a permit for this area.. I do not feel comfortable with him here, is there anything you can do? "

The officer can then be seen talking to the man who gesticulates back and tells him to "shut the f*** up."

More police arrive and Irizarry says she still doesn't feel safe. The man resumes his abuse, saying: "You're not American, if you were American you wouldn't wear that. You know that right?"

A female officer asks to see his ID and can be heard telling him that he's intoxicated to which he replies "well that's your judgment." She explains that Irizarry has a permit and she warns him that he could be arrested "for not being compliant."

"You don't come here harassing people," the officer continues. "People have just as much right to be here as you and when you're drunk, you don't belong here."

The female officer then speaks with Irizarry who gives her version of the incident and the officer explains that they were called to the area after a report that a man was choking a woman.

Eventually the first officer on the scene takes notes of Irizarry's account of the incident and says that he was at the scene due to the separate incident, noting that she was not being attacked though acknowledging she felt threatened.

Irizarry can be heard explaining to the officer that the incident began when they had asked the group the man was in if they could move as they had a permit for the area. She said the group politely complied but her Puerto Rico shirt appeared to act as a trigger to the man.

"Today a video surfaced of an undignified event in which a Puerto Rican woman was brutally harassed by a bigot while an officer did not interfere. I am appalled, shocked & disturbed by the officer's behavior," Rossello's tweet reads.

Preckwinkle released a statement Tuesday saying she spoke with the Puerto Rican governor.

"This afternoon I spoke with Gov. Ricardo Rosselló of Puerto Rico," Preckwinkle's statement said. I expressed my regret over the June 14 incident in the Caldwell Woods Forest Preserves and assured him that what is shown in the video does not represent our values in Cook County. I assured him that disciplinary action regarding the Forest Preserves police officer will be taken upon conclusion of our investigation."

Cook County Board Commissioner of the Eighth District Luis Arroyo, Jr., also weighed in on the incident.

"Me, personally, I believe that this officer did not do his duty. And I will not accept anything else but this officer's termination," Arroyo said.

Puerto Rico is a US commonwealth with its own constitution, rather than a state. Puerto Rican residents have been American citizens since 1917 and have the right to vote in US presidential primaries, but not in presidential elections.

The Trump administration has received criticism for its treatment of Puerto Rico, particularly for its response after Hurricane Maria struck last September.

The official death toll from Maria stands at 64 but a recent Harvard study estimated 4,645 people could have perished.

U.S. Rep. Luis Gutierrez has written a letter to the acting assistant attorney general in charge of the Civil Rights Division at the Department of Justice asking them to investigate the incident.

In the letter, Gutierrez wrote, "I understand this incident on a gut level because almost exactly the same thing happened to me when I was a freshman in Congress. I was denied entry into the Capitol complex by U.S. Capitol Police despite being a Congressman with identification, because my daughter was carrying a Puerto Rican flag and the officer doubted that I could possibly be a Member of Congress. So this kind of incident is unfortunately not unusual and though we did not have viral videos 25 years ago, I wish I had done more then to stop the kind of behavior on display in Ms. Irizarry's video, so that we can prevent the cycles of hatred and bigotry that often repeat themselves today."

You can read the full text of the letter here.

WLS-TV contributed to this story