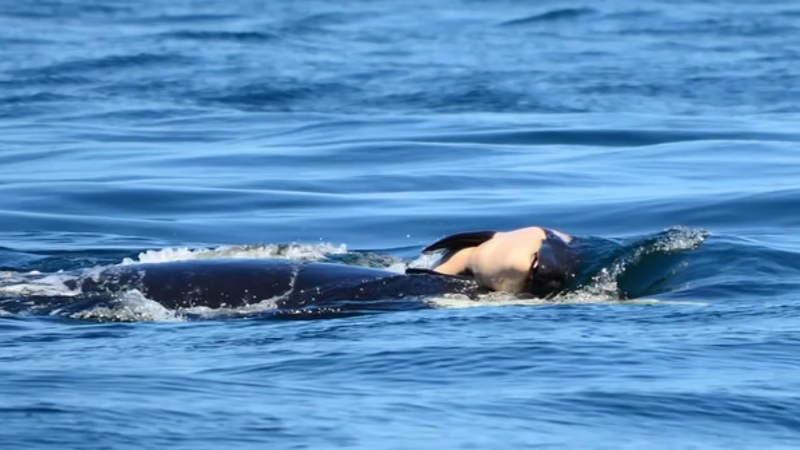 PUGET SOUND, Wash. -- It's a heartbreaking scene in the waters of Washington's Puget Sound: a mother orca whale pushing her dead calf through the waters for days. As KOMO-TV reports, wildlife experts see this as an alarming sign for the endangered species.

For the ninth day the grieving mother continues to push her dead calf through the waters of Puget Sound.

Experts believe the baby' death could be attributed malnutrition -simply put - a lack of their primary food source: Chinook Salmon.

"We are extremely concerned about what's happening with southern resident killer whale population," said Bran Hansen with NOAA Fisheries. "We are concerned you know that she's spending a lot time doing this behavior that's she not necessarily foraging."

J35 was spotted Thursday afternoon in the Georgia Strait. It's believed her family who is also swimming with her is sharing their food so she can eat.

"She's getting no rest either and just having to keep constant attention so it's amazing she must be exhausted," Orca Network Co-Founder Howard Garrett said.

The Center for Whale Research says the grieving mamma Orca has swam nearly 700 miles in the last nine days pushing her baby who only lived for 30 minutes.

The calf's death is a big blow to the endangered population and wake-up call that more Chinook salmon are needed.

"Frankly the best time to recover orcas, the best time recover Chinook was 30 years ago, so we missed that - so the second best time is right now," Mindy Roberts, Puget Sound Director for Washington Environmental Council.

Mindy Roberts with the Washington Environmental Council says we must increase prey, reduce toxins and vessel noise or these majestic Southern Residents will simply die off without intervention.