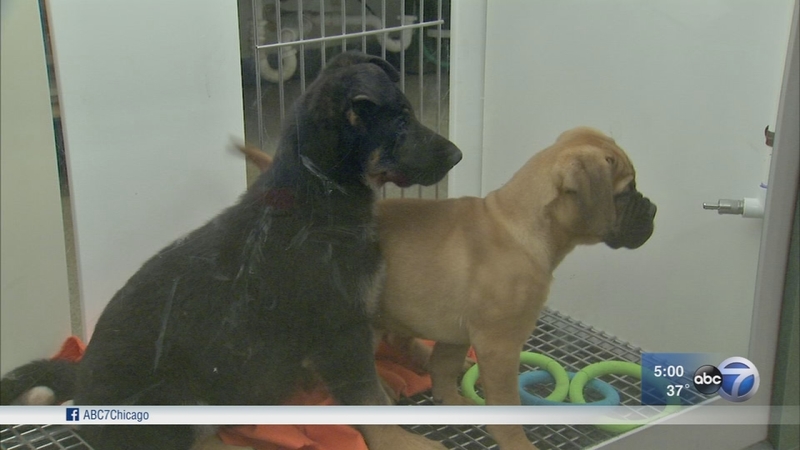 NAPERVILLE (WLS) -- Officials in Will and DuPage counties have proposed a plan to crack down on the sale of commercially bred pets in pet stores.

Several lawmakers, animal advocacy groups and prosecutors back the ban. The purpose is to curb puppy mill sales and encourage pet stores to partner with animal shelters and rescue organizations. The proposes legislation is modeled after a Cook County ordinance.

Pure bred cocker spaniels, German shepherds and labs, there is a variety of favorite breeds at Petland, the Naperville pet store is where Keyonce Barrett paid $3,000 for a golden doodle she named Louie.

"He was the cutest most adorable fluffy dog you could ever meet, all he wanted to do was give hugs and kisses," Barrett said.

Five days after 3-month-old Louie went home with Barrett, he became very sick. A week later, the dog was dead.

Barrett said Louie had multiple health problems, including pneumonia. She said when Petland sold the golden doodle to her, the store never told her Louie was on antibiotics.

"The people selling to us, they are so slick, they say they are so perfect so healthy," Barrett said.

Stories likes Barrett's are why some DuPage and Will county public officials are calling for a ban on the sale of commercially bred dogs, cats and rabbits in pet stores...they say pet store dogs come from puppy mills.

Petland's owner was unavailable for an on-camera interview, but in a written response, Carl Swanson says the proposed ban will close pet stores. He said pet stores represent less than seven percent of all dogs sold in America. He said lawmakers should focus on unregulated internet sales of pure bred dogs instead of his business.

"No, it won't put them out of business. We are euthanizing millions of dogs. There's plenty of them at rescue facilities across the county," said DuPage County Animal Control Committee Chairman Brian Krajewski.