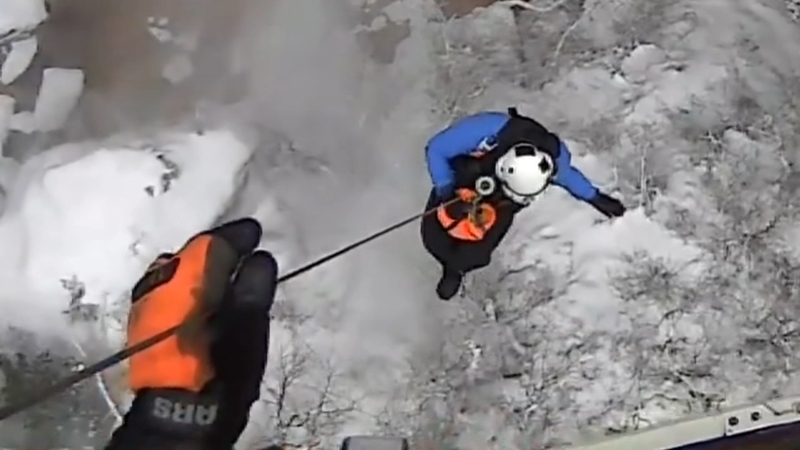 SPRINGDALE, Utah -- In the span of two days, an Arizona man got stuck in quicksand for hours and then had to spend the night coping with a winter storm before being rescued.

The ordeal began Saturday as 34-year-old Ryan Osmunm and his girlfriend, Jessica McNeil, were hiking at Zion National Park in Utah. Osmun's leg got stuck in quicksand in a location that was about a three-hour hike from the start of the trail they were taking, called the Subway route.

"His leg was buried up to his knee and he was unable to free himself," a release from the National Park Service said.

Osmun and McNeil tried to free his leg, but were unsuccessful. So McNeil left him "with warm gear and clothing" and hiked for three hours until she got cell phone service to call 911.

"I didn't know if I would ever see her again," Osmun said.

"It was the hardest thing I ever had to do. The scariest thing. I didn't know if I could do that hike by myself. At one point I thought, I might as well turn back and... we could just be together for the last moments," McNeil said.

"The water was so cold I thought for sure I would lose my leg, because there was no way she would be able to get back fast enough to get me out," Osmun said.

A Zion search-and-rescue team began hiking to find them, the release states. National park rangers found McNeil, who was showing signs of hypothermia, at the beginning of the trail and treated her.

Several hours passed before the rangers could find Osmun, who was described as "stable but suffering from exposure, hypothermia, and extremity injuries," according to the park service.

"When he walked up, he said, 'I'll be honest with you, you should be dead or unconscious right now,'" Osmun said of his rescuer.

The Utah Department of Public Safety (DPS) said he had been exposed in water for 10 hours. It then took several more hours into the night before his leg was freed. Rangers then rewarmed and treated his leg.

But the mission wasn't over.

Winter storms in the area brought "four additional inches of snow," according to the park service, so the rangers and Osmun spent the night at the site.
A Utah DPS helicopter was dispatched from Salt Lake City the next morning, the release from the agency states. The winter storms made it hard for rescuers to see all morning, the release said, but a small break in the weather that afternoon helped rescuers find Osmun and rangers -- as seen in a video the DPS posted on YouTube.

Osmun was then taken to a local hospital. Both he and McNeil are expected to be OK, according to CNN affiliate KUTV.

"To the rescue crew that saved me, there's not enough I can put into words how grateful I am to them," Osmun said.

What exactly is quicksand?

Quicksand develops when saturated sand acquires the characteristics of liquid, according to Britannica Academic. It's usually found at the mouths of large rivers, flat stretches of streams or even beaches where water pools up and fills with sand.

Britannica states that while a person or animal can get stuck in quicksand, they "cannot sink below the surface" because of body buoyancy. Struggling, however, can lead to losing balance and possible drowning.