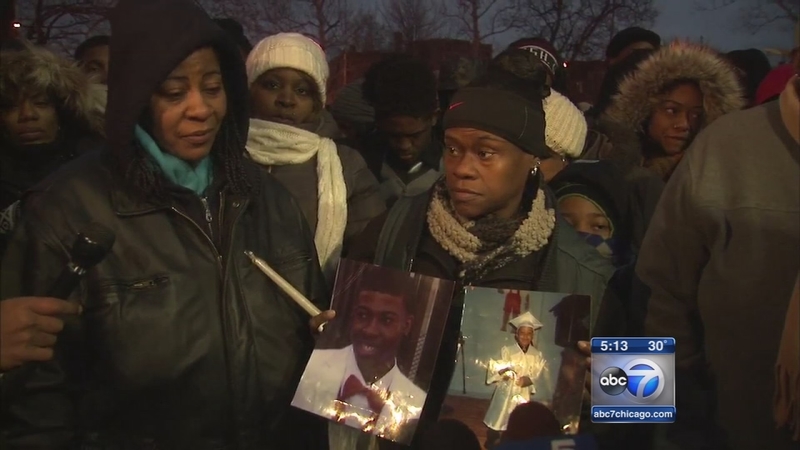 CHICAGO (WLS) -- A vigil is being held for Quintonio LeGrier, the 19-year-old shot by Chicago police Saturday morning.

Quintonio LeGrier graduated from Gwendolyn Brooks College Prep in 2013. Tuesday, many of his former classmates and friends gathered outside the school to remember him the way they knew him: as a bright student and an athlete.

"He was a straight-A student, he ran the marathon, he was just a good kid," remembered one attendee.

The circumstances that led to LeGrier, and his downstairs neighbor, 55-year-old Bettie Jones, being shot remain unclear. Appearing on CNN today, his father, Antonio LeGrier says he called 911 after twice hearing banging on his door.

"I called the police department because I wanted someone to try and help with whatever he was going through, because I was not trained," Antonio said. "But I never once thought that once he entered that staircase, that his life would be ended by someone who didn't know what to do."

During that same interview Antonio went on to say he called Jones to let her know what was happening and then came down from his upstairs apartment when he heard voices. That's when he heard the gunshots and what he thought was a police officer's voice.

"I can't believe it. I thought he was coming at me with that bat. F-word, F-No! Twice he yelled," is what Antonio said he heard.

Police later said officers opened fire when LeGrier became combative. But his father says Quintonio was still inside the building's vestibule when he was shot.

Among his friends, family and community, there is a lot of sadness and a lot of anger.