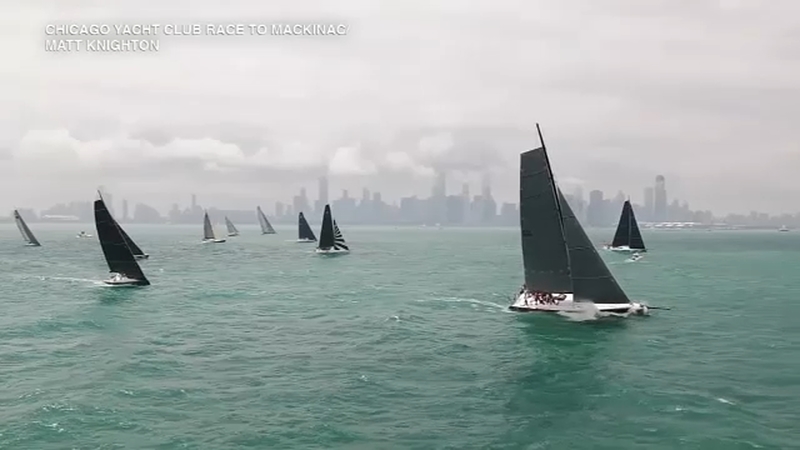 CHICAGO (WLS) -- Sailors started checking in Thursday for the Chicago Yacht Club's 111th Race to Mackinac, which kicks off at Monroe Harbor this weekend.

The death of a sailor who fell overboard during last year's competition has participants and officials stressing the importance of safety during the 333-mile yacht race.

Sailor Bruce Santerre of Team MC2 was said he was racing last year when the awful reality set in.

"You've got to have that trust element that everyone is doing the same thing for the same purpose and the purpose has to be about safety," Santerre said.

Sailor Jon Santarelli was killed after he was thrown off of his boat into rough waters. His automatic life vest didn't inflate.

Now, as the boats enter Monroe Harbor, safety is the number one priority.

"We meet with all of the local officials so our Coast Guard, our fire department, our Marine police and just make sure everyone's on the same page. Safety comes first," said Principal Race Officer Alina Dix.

And that comes with some brand new rules for all competitors.

Its advice a new generation of racers, like 15-year-old Sam Rosenbaum of team MC2, is taking to heart as they prepare to head out onto the water.

"You're sitting there, you're hanging out, the boat's going as fast as you can make it go, and it's just super cool," Rosenbaum said.

Franny Schulte, 22, of Team No Surprise said she agrees.

"Sometimes you don't even know like who's ahead of you, who's behind you, and it just makes you sail even harder and faster," Schulte said.

Rosenbaum and Schulte both said they are ready for the ocean like sailing event.

Even though the water level of Lake Michigan is high after record-breaking rain, race officials said it should not impact competitors.

Dix said racers are already dealing with water that is 90 ft. deep or more, so a plus or minus 10 ft. won't make much of a difference. She said the higher lake levels might actually help at the end making it easier to get into a slip and dock on Mackinac Island.