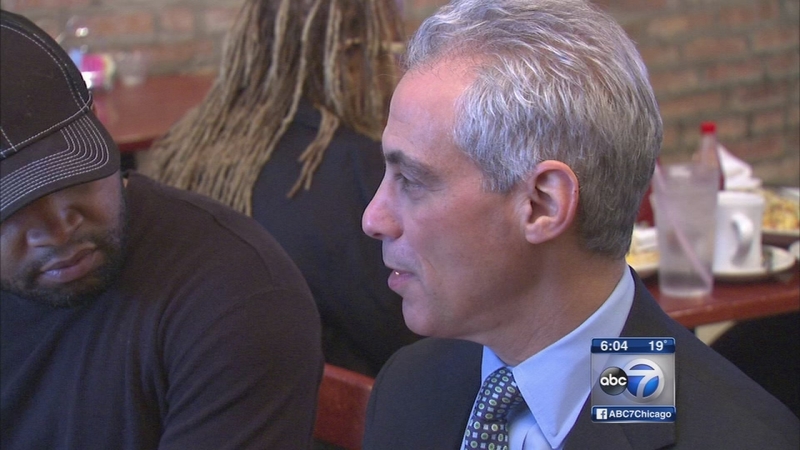 CHICAGO (WLS) -- Mayor Rahm Emanuel is working on a makeover of his image to try and win more votes in the race for mayor. In a new campaign ad, the mayor admits he can rub people the wrong way.

For the past week, every time Rahm Emanuel takes questions he's asked to psycho-analyze his own personality. It's awkward, for him, for us, for everyone. But it's now led to a mayoral mea culpa.

From denial the day after the election to an admission Wednesday and even a new television commercial: Emanuel is admitting his personality may have cost him votes.

"I've said repeatedly and I'll say it again: My strengths are my weaknesses," Emanuel says.

As part of his quest to show he "gets it," the mayor invited ABC7 Eyewitness News to a lunch on the south side where he's trying to change hearts and minds.

"He's making a good effort," said Sally Johnson, one of the voters at the luncheon. "People seeing him, speaking with him."

But when we asked if Emanuel has her vote, Johnson said, "No, I'm going with Chuy."

The mayor says meet and greets like this are nothing new, but his message is: You don't have to like me to trust that what I'm doing is in the best interest of Chicago.

"One of us is going to be mayor," Emanuel told us on Wednesday. "Mayor for four years with big decisions and big challenges."

The mayor says "Rough and Tumble" Rahm isn't going away when it comes to fighting for issues important to the city. Wednesday he blasted his friend Governor Rauner's proposed budget cuts.

He's also already painting his challenger Chuy Garcia as a candidate with big ideas, but no way to pay for his proposals, but it will be a delicate balancing act.