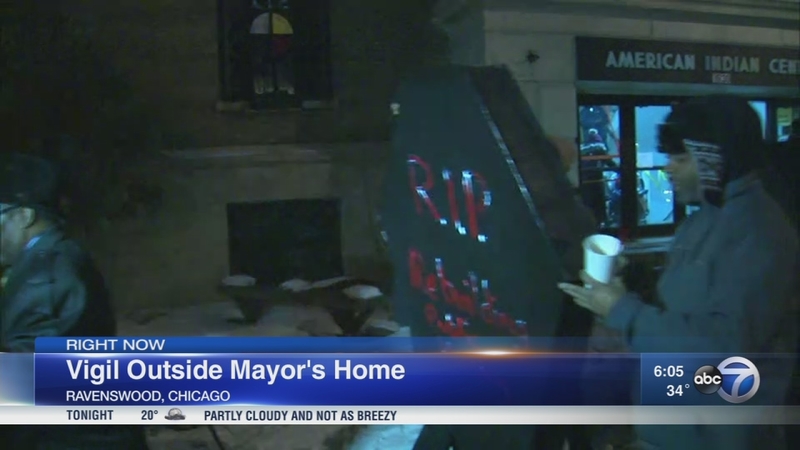 CHICAGO (WLS) -- Families who have lost loved ones to gun violence in Chicago in 2016, along with faith and community leaders, held a protest outside Mayor Rahm Emanuel's house Wednesday evening. They said the mayor's policies are contributing to the out-of-control violence the city has seen this year.

Before arriving, demonstrators gathered at a nearby community center where several people spoke. They then held a march through the mayor's neighborhood, carrying candles and symbolic coffins.

The protesters said gangs and illegal guns aren't solely to blame for the soaring violence. There have been more than 730 murders in Chicago this year.

They blame the mayor for closing mental health clinics, cutting school budgets, a lack of public housing and for refusing to allow for an elected civilian body to oversee the police department.

"He's got to come down from his ivory tower and begin to face the people because your city is hurting," said Arewa Karen Winters.

"The mayor has not done anything. Our leaders have not done anything. They blame us, they say they need to vote. We vote, a lot of us do vote. They say we need to be in the campaigns, they give us the runaround," said Camiella Williams.

In an op-ed in USA Today, Chicago Police Superintendent Eddie Johnson wrote, "The mayor is driving economic opportunities in our most struggling neighborhoods. He is also investing $36 million over the next three years to make mentoring universal for young men in our 20 most violent neighborhoods ... But at the end of the day, our violence problem is an illegal gun problem."