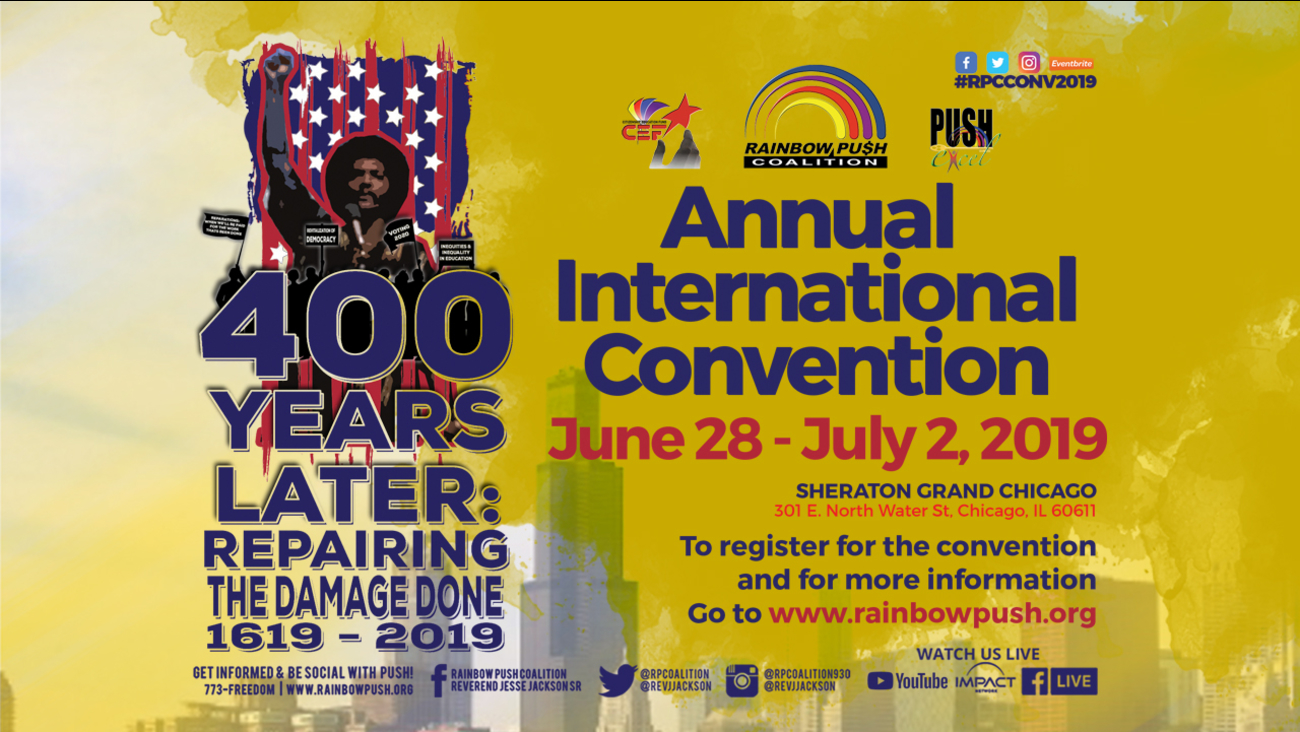 CHICAGO (WLS) -- This summer in Chicago, as the nation gears up for the most consequential presidential election campaign in generations, the Rainbow PUSH Coalition will take its Annual International Convention directly to the people.

There will be major events downtown as well. Pete Buttigieg, the 37-year-old mayor of South Bend, Indiana, whose vision and drive helped revive his Rust Belt city's dying central business.

district and rocketed him near to the top of the crowded Democratic presidential field, will be the keynote speaker at the convention's Business Breakfast July 2 at the Sheraton Grand Chicago, 301 E. North Water Street.

"I am looking forward to the opportunity to meet with Rev. Jesse L. Jackson, Sr. and other African American community leaders and activists attending this year's Rainbow PUSH Coalition International Convention," Mayor Buttigieg said. "Rev. Jackson and Rainbow PUSH have been on the front lines of the fight to protect and defend civil rights for a generation. We share in that dedication to freedom and commitment to making democracy work for all people. Leadership is about calling people to their highest values, and Rev. Jackson has spent his life calling our country forward as a better and more just nation."

"We not only need a new president, we need a new condition," said Rev. Jackson, founder and president of the Rainbow PUSH Coalition. "Everything we've fought for over the last 65 years is in peril."

The title of this year's gathering of one of the country's preeminent civil rights and human rights organizations is "400 Years Later: Repairing the Damage Done, 1619 - 2019."

The convention, which will include a delegation of more than 100 elected officials, students, diplomats, educators and business leaders from across Africa, is dedicated to the 400-year anniversary of the first documented forced arrival of Africans to English North America.

That epochal event in August of 1619 and the following four centuries of bondage and emancipation, Jim Crow and resistance, assassinations and ascendance to the highest office in the land, will be discussed and analyzed during a special Town Hall, featuring a panel of scholars on slavery and freedom.

The first day of the convention - Friday, June 28 - will be held at the headquarters of the Chicago Teachers Union, 1901 W. Carroll Avenue. Among the sessions will be the Microsoft/PUSH for Excellence (PUSH Excel) tech challenge, featuring local high school students. There will a labor luncheon, an educational summit, a robotics demonstration by the

Saturday, June 29, will include a Census 2020 Breakfast at Apostolic Faith Church, 3823 S. Indiana Ave. The breakfast will be followed at the church by a special edition of the Rainbow PUSH Coalition's Saturday morning community forum and international broadcast, a decades long platform for the giants of sports, entertainment, politics and civil rights.

The convention's second day will conclude with the Rainbow PUSH Coalition Love Music Festival & Family Affair, a reunion of old friends and new on the grounds of the DuSable Museum of African American History, 740 E. 56th Place.

On the evening of Sunday, June 30, the convention returns to Apostolic Faith Church for the Rev. Clay Evans Gospel Concert, featuring some of the country's top gospel singers.

On Monday, July 1, the fourth day of the convention will be held at the Sheraton Grand Chicago.

There will be a Health Breakfast, featuring a "fireside chat" with Rev. Jackson and executives from CVS. That session will be followed by a Health Plenary to discuss the current state of health care in the U.S. and across the globe.

The always popular and inspiring International Women's Luncheon will be Monday afternoon as the convention celebrates and honors the growing number of women elected to office and the sweet sound of glass ceilings shattering throughout the country - with the thickest one still to go.

Monday's sessions will also include a Global Peace, Human Rights & Democracy Forum, an Independent Music Seminar and a Sports Banquet where prominent sports figures and athletic league officials will share stories about life beyond the playing field.

Tuesday, July 2, the fifth and final day of the convention, includes an address by Mayor Pete Buttigieg at the Business Breakfast, an International Business Roundtable on opportunities in global investment in technology, a Construction Summit, a panel on Technology & Civil Rights Policy and a Hedge Fund Workshop all at the Sheraton Grand.

The last events of the convention will be at Apostolic Faith Church and include a Clergy Roundtable, a Clergy Luncheon, the Town Hall Reception and panel of scholars - "400 Years Later...."

To register for the convention and for more information go to www.rainbowpush.org.