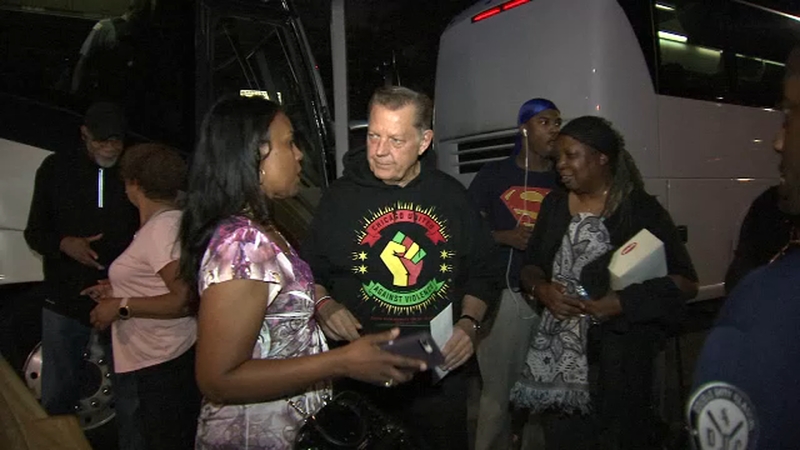 CHICAGO (WLS) -- With little more than boxed lunches and warm clothes to sleep in, hundreds of Chicagoans are driving through the night to Washington, D.C. with a message for Congress: "#EndGunViolence."

Traveling aboard a caravan of buses organized by Father Michael Pfleger and St. Sabina Church, the group will rally outside the U.S. Capitol Wednesday; that same day the House Judiciary Committee is scheduled to hold a hearing on "Protecting America from Assault Weapons."

"Our children are dying. Older people are dying. Everybody's dying," said Savannah Dean, 72, one of the Chicagoans traveling aboard Father Pfleger's bus.

WATCH: ABC7 rides along with hundreds of Chicagoans headed to D.C. for the #EndGunViolence rally
EMBED More News Videos

Hundreds of Chicagoans are driving through the night to Washington, D.C. with a message for Congress: "#EndGunViolence."

Also on the roughly 12-hour journey is 22-year-old Darnell Ash.

Ash is calling for stricter gun laws, including tighter background checks, in memory of his friend who he said died from gun violence in recent years.

"I really believe that we're at a tipping point. There's an anger across America because it's hit every community," said Pfleger as the buses began trekking east.

WATCH: Hundreds of Chicagoans load up on buses headed to D.C. for the #EndGunViolence rally
EMBED More News Videos

Traveling aboard a caravan of buses organized by Father Michael Pfleger and St. Sabina Church, the group will rally outside the U.S. Capitol Wednesday.

For Pfleger, the scales tipped during the first weekend of August this past summer. 22 were killed in El Paso, Texas; nine were killed in Dayton, Ohio; Dozens more were injured in the two tragedies.

While the pair of high profile mass shootings seemed to paralyze the nation, Chicago was walloped by gun violence too (yet again): seven were killed and 52 more wounded.

Pfleger said at Sunday services that August 4 he was "irate," telling the congregation, "'We're going to do more than just talk about it.'" For this Catholic priest, the now broken record of "thoughts and prayers" is meaningless alone.

"The faith that I follow says 'faith without works is dead.' Faith has to be put into action or faith is useless," Pfleger said.

Wednesday, Pfleger and his allies plan to act, in hopes that Congress will follow suit.

What can be accomplished remains unclear with a divided Congress.

Further complicating the split, Senate Majority Leader Mitch McConnell has deferred to President Donald Trump on the gun control issue; the president hasn't put forth a plan yet.