Gun violence rally draws hundreds of Chicagoans to US Capitol 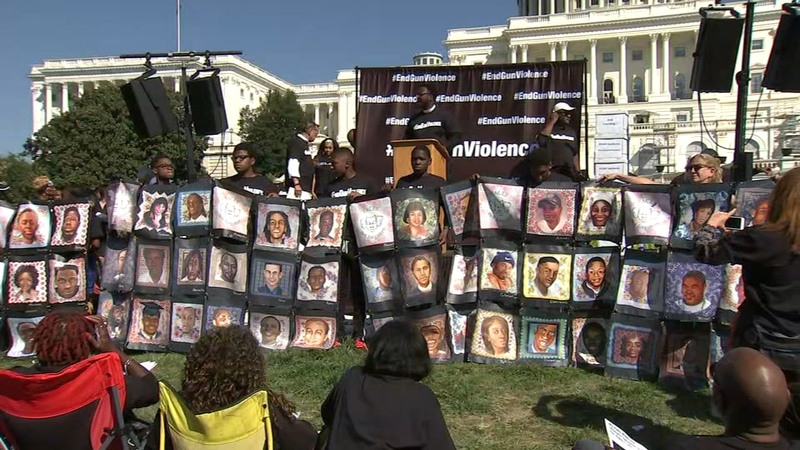 Gun violence rally draws hundreds of Chicagoans to US Capitol

CHICAGO (WLS) -- Their message was loud and clear as hundreds of Chicagoans joined a rally to end gun violence in Washington D.C. Wednesday.

The group gathered on the U.S. Capitol lawn demanding, what they call, stricter federal gun laws.

The drove of people, led by Father Michael Pfleger and the St. Sabina congregation, drove through the night Tuesday to demand Congress to pass stricter background checks and an assault weapons ban. They hope for an end to the violence plaguing America.

WATCH: ABC7 rides along with hundreds of Chicagoans headed to D.C. for the #EndGunViolence rally
EMBED More News Videos

Hundreds of Chicagoans are driving through the night to Washington, D.C. with a message for Congress: "#EndGunViolence."

Many of the Chicagoans are teens who fear school shootings, neighbors who hear gun shots ring out and parents who mourn children killed by gun violence.

Many of the faces lost, frozen in time, were held high to remind us what Chicago gun violence truly means.

Hundreds of Chicagoans arrive to Washington, D.C. with a message for Congress: "#EndGunViolence."

Annette Nance-Holt lost her 16-year-old son Blair in 2007. He was shot and killed while shielding his friend from gunfire. Years later Blair's mother now advocates for gun control legislation to prevent more children from dying. She flew to Washington just for the rally.

Zonia Cooper buried her 23-year-old son Jordan this past Saturday and also felt the need to make the long journey to Washington overnight by bus.

Numerous Democrats from Illinois and beyond came to voice their support, including House Speaker Nancy Pelosi.

The overall consensus was to call on Senate Majority Leader Mitch McConnell to take action.