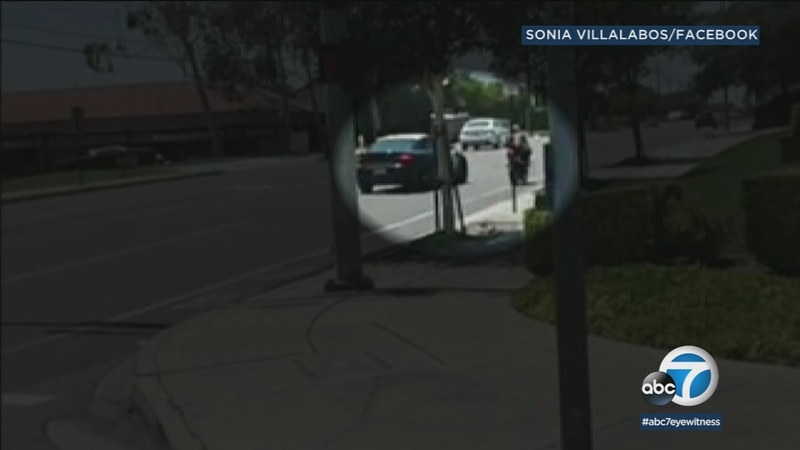 RANCHO CUCAMONGA, Calif. -- It was a tense scene Sunday during a memorial motorcycle ride in Rancho Cucamonga.

A group of riders accuse a California Highway Patrol officer of knocking over a rider before he was taken into custody. Cellphone video shot by one of the motorcycle passengers showed a CHP vehicle colliding with a biker, who fell to the ground.

It all started in the City of Industry, when the group of bikers started their memorial ride and began heading toward a fundraiser in Rancho Cucamonga. They were on the eastbound 210 Freeway when things started to go wrong.

Cellphone video captured by passengers showed a CHP officer trying to pull over one of the bikers.

"The officer actually took off on all lanes, risking everyone's life on the freeway because we took the whole freeway,"witness Jonathan Famous Rede said.

The officer moved over to the shoulder, near the wanted motorcycle rider, and appeared to try cornering him, but the biker slowed down, went behind the car and took off.

The group exited the freeway, and the chase continued to another exit and then backtracked, passing everyone stopped at the light.

"All of the sudden I just get the pursuit going and the cop just knocks the biker out," witness Sonia Villalobos said.

She was the witness who captured the crash and was streaming it on Facebook Live.

In that video, the CHP vehicle moves quickly alongside the biker and in a moment, the vehicles collide and the biker falls. The other riders confronted the CHP officer, which created a tense situation.

During the confrontation, the motorcycle rider who was knocked down was taken into custody. The impact of the crash dented the car and motorcycle, but the rider did not appear to be hurt.

Dozens of the motorcyclists stayed at the scene to provide eyewitness accounts to other law enforcement who arrived as backup. From their view, the officer's actions appeared reckless.

"The cop was on one side and he actually knocked down the biker. It's not right. You can't compare four wheels to two wheels," Villalobos said.

CHP officials said the officer's vehicle crashed into the motorcycle during a routine traffic stop and that the officer is out of the L.A. area. No further details on why the officer was trying to pull over the rider were provided by the agency.