Carlton Weekly went by the name FBG Duck in his music.

Weekly is pleading that no one be killed to avenge her son's death.

"I am asking that his fans, friends of my son to please not seek retaliation," she said.

The artist was killed Tuesday afternoon while he shopped on East Oak Street by multiple gunmen in, what witnesses described as, an ambush attack.

Police said they are concerned that there will be a violent retaliation.

"We're putting extra resources in the areas where we think there might be retaliation just as a precautionary measure," said Deputy Chief Daniel O'Shea.

Other officers said this might be a good weekend to stay home.

Authorities said the 26-year-old musician may not have been a gang member, but had gang affiliations and was targeted because he had recently made a video that insulted a dead gang member of a rival faction involved in an ongoing feud. Weekly's family and friends said that simply is not true.

"He was an example of making a difference. He came from nothing, and he made something. He was legit. He was a working man," said Betty Weekly, Carlton's aunt.

Relatives said three years ago, Weekly's older brother, who performed under the rap name FBG Brick was killed in a driveway shooting in the family's Woodlawn neighborhood.

The family said they are shocked that it happened again.

"We've been on calls all morning long working to try to calm things down," community activist Bamani Obadele said.

Chicago police said they will remain on alert in an effort to keep neighborhoods safe this weekend.

"I'm tired of thanking God I made it home. That's not a normal thing. When I talk to my girlfriend who lives in Naperville, she doesn't thank God that she made it home," said Anthony Lovelace with St. Sabina BRAVE Youth Leaders.

A group gathered Friday night at Chicago Police Headquarters that included the parents of victims of unsolved murders. They called for the department to devote the same resources to the South and West sides, as they did to the Gold Coast. 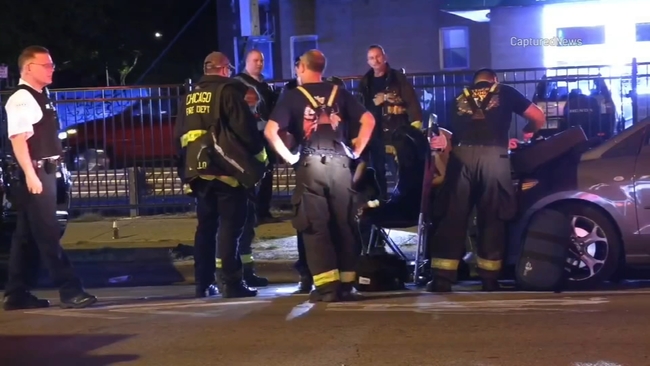