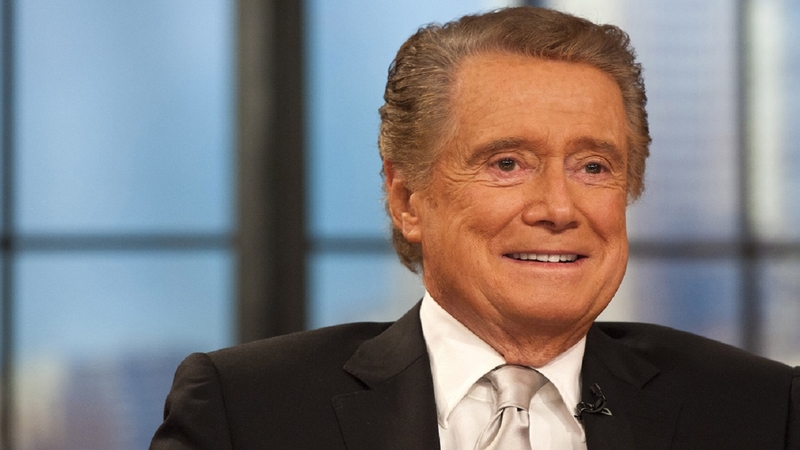 Kelly Ripa, his long-time co-host, posted in a note signed with Ryan Seacrest: "We are beyond saddened to learn about the loss of Regis Philbin. He was the ultimate class act, bringing his laughter and joy into our homes everyday on Live for more than 23 years. We were beyond lucky to have him as a mentor in our careers and aspire everyday to fill his shoes on the show. We send our deepest love and condolences to his family and hope they can find some comfort in knowing he left the world a better place."

The "Live" family released a statement Saturday saying: "Our hearts are broken to learn the news about Regis' passing. Regis originated "Live" as a local New York broadcast back in 1983, and for more than 27 years he poured his heart and soul into the show. Many of the members of our staff began their careers at "Live" with Regis, and were lucky enough to learn from a master broadcaster. Our hearts go out to Joy and his family."

Philbin's death has drawn condolences from all all areas of public life, including President Trump, who called him a "fantastic person, and my friend. He kept telling me to run for President."

His pioneering career began at the dawn of television, and he logged so much time on TV that he set a Guinness World Record for most hours on camera with his Aug. 20, 2004 "Live!" show. Philbin co-hosted "Live!" for 28 years, the zenith of a long career in talk shows.

He was also the host of the popular "Who Wants to Be a Millionaire" on ABC.

REGIS. There will never be another.

“Regis was a very special part of our Disney family for over a half century and we will miss him deeply. He was an amazing person, consummate entertainer, TV icon, and a true Disney Legend. Our heartfelt condolences to Joy and the entire Philbin family.”
- Bob Chapek, Disney CEO

We are heartbroken to hear that a long time colleague & friend, #regisphilbin passed away at the age of 88. Regis graced us with warmth, humor & a self-deprecating wit, always bringing happiness to us all. Our hearts go out to Joy and to his family. Rest In Peace, Regis.

Regis was a great broadcaster, a good friend and a tremendous amount of fun. He leaves behind a beautiful family and a TV legacy that will likely go unmatched. Regis, I hope our friend Rickles met you at the pearly gates with open arms and a slew of the insults you loved so much

We throw this word around too much but Regis Philbin was a legend. He was a true gentleman I’m glad I got to know and a TV host I admired and was honored to follow. Much like Arnold Palmer everybody has a great “Regis” story, I’m grateful I have mine

Regis is in the same category as Carson. Superlative. He was on our show a million times, always the best guest we ever had, charming, lovable and could take a punch. When he retired I lost interest in television. I love him.

So sad to hear of the passing of the great Regis Philbin. He was a guest on @CenterStage and he could not have been nicer and sweeter to the whole crew. A consummate broadcaster, he commanded a room with humor and energy. He was a force of nature and will be terribly missed.

Regis Philbin was such a prolific talent. He could do it all, and we loved him for it. I will miss him every day. My heartfelt condolences to Joy and his family. pic.twitter.com/SUSyEdReS7

Bronx born and raised, Regis Philbin greeted us for years with our morning coffee and at night after dinner.

His humor and enthusiasm touched millions of Americans. My heart goes out to Joy and his loved ones.

One of the greats in the history of television, Regis Philbin has passed on to even greater airwaves, at 88. He was a fantastic person, and my friend. He kept telling me to run for President. Holds the record for “most live television”, and he did it well. Regis, we love you....

My condolences to the entire Philbin family on the passing of a really good person and American. https://t.co/Qo9cYqGfBz

Regis Philbin always made me laugh and I loved being on his show as he made everyone feel so welcome. We will miss him. pic.twitter.com/sMaYaE5cvV

What a loss- The wonderful Regis Philbin. I met him in 1985 when I was on the “Rodney Dangerfield Young Comedians Special” and we loved each other ever since. Such a TV icon and above all, a good man. My sympathies to Joy and all of his children and friends.

Dear Dear Regis Philbin has passed away from us. Hard to believe he’s gone. Such a fabulous presence RIP Dear Regis

I absolutely LOVED Regis Philbin. I knew him to always be interested in everything, current, happy, funny, generous and sweet. As wonderful a man as he was talented. And, as this photos proves, he was up for anything! I will never forget him and miss him very much. RIP Regis ❤️ pic.twitter.com/U2TWkStgv0