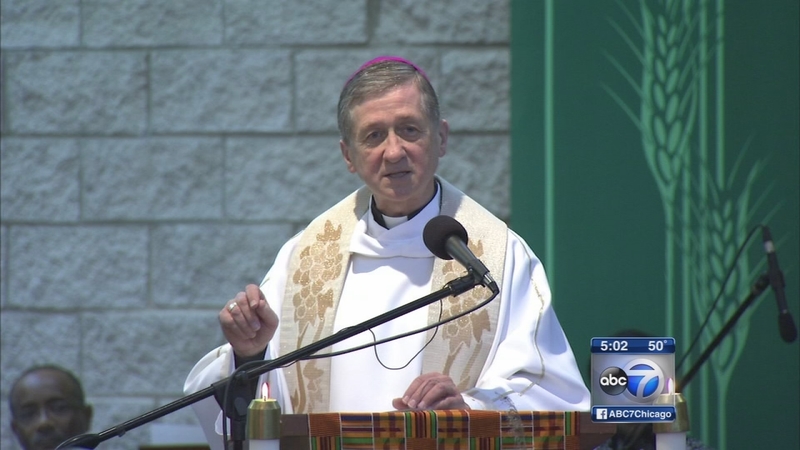 Archbishop Cupich signaled a new era for Chicago's Catholic Church and wasted no time apologizing to the church for the priest sex abuse scandal that devastated the predominately African-American parish.

"First of all, to those who were injured, and I apologize. I'm sorry, that's not the way we should treat each other," Cupich said.

The visit brought him face-to-face with some of the biggest issues within the archdiocese and signaled to some a new era for Chicago's Catholic community.

"With him being here, it's like a breath of fresh air. It's actually breathing more life back into the community," said parishioner Raphael Miles.

"Coming to our church, particularly, says a lot about wanting to honor the black Catholic experience, and wanting to be in a place that's gone through so much," parishioner Alex Wiesendanger said.

Cupich's celebration of Mass took place at the West Side church where Priest Daniel McCormack was convicted of sexually abusing at least five boys back in 2007. McCormack is serving a five-year prison sentence as even more accusations continue to surface and as the archdiocese pays millions in settlements.

"His first Sunday as archbishop is out in the margins. That says so much about the new energy," said Andrew Lyke, Chicago Archdiocese of Black Catholics.

While some are pleased with the message sent by the archbishop's appearance at St. Agatha's Sunday, Catholic Church watchdog group The Survivors Network of Those Abused By Priests wants Cupich to release the still sealed records on McCormack.

"We want Archbishop Cupich to show that he is concerned about children today, not just healing those from the past," said Barbara Blaine, SNAP president.

For Archbishop Cupich, who made his first public appearance since his installation Saturday night at a Loyola Medical School Awards dinner, the trip to St. Agatha means a fresh start.

"I wanted to come to a community where I saw some resiliency - not only because of the abuse that happened, but also because of the property and the struggles that people have," Cupich said. "These folks know how to bounce back from whatever is thrown at them."

Cupich shared a message of resurrection and reconciliation with a packed sanctuary.

"I said that I wanted to be a witness to the risen Lord, to where the Lord is rising," he said.

As the congregation of St. Agatha's also grapples with neighborhood violence and a struggling school, parishioners say the visit by Archbishop Cupich signals a new beginning in the Catholic Church.

"I feel that it's going to be very, very positive for us," said parishioner Carolyn Shepard. "It looks bright in the future."

Cupich has taken a leadership role in dealing with the sex abuse crisis since it came to light in 2002. The archbishop has committed to visiting three ethnic parishes his first three Sundays.

Cupich will conduct his next Sunday Masses Nov. 30 at St. Agnes of Bohemia Parish and then Dec. 14 at St. Hyacinth Basilica.