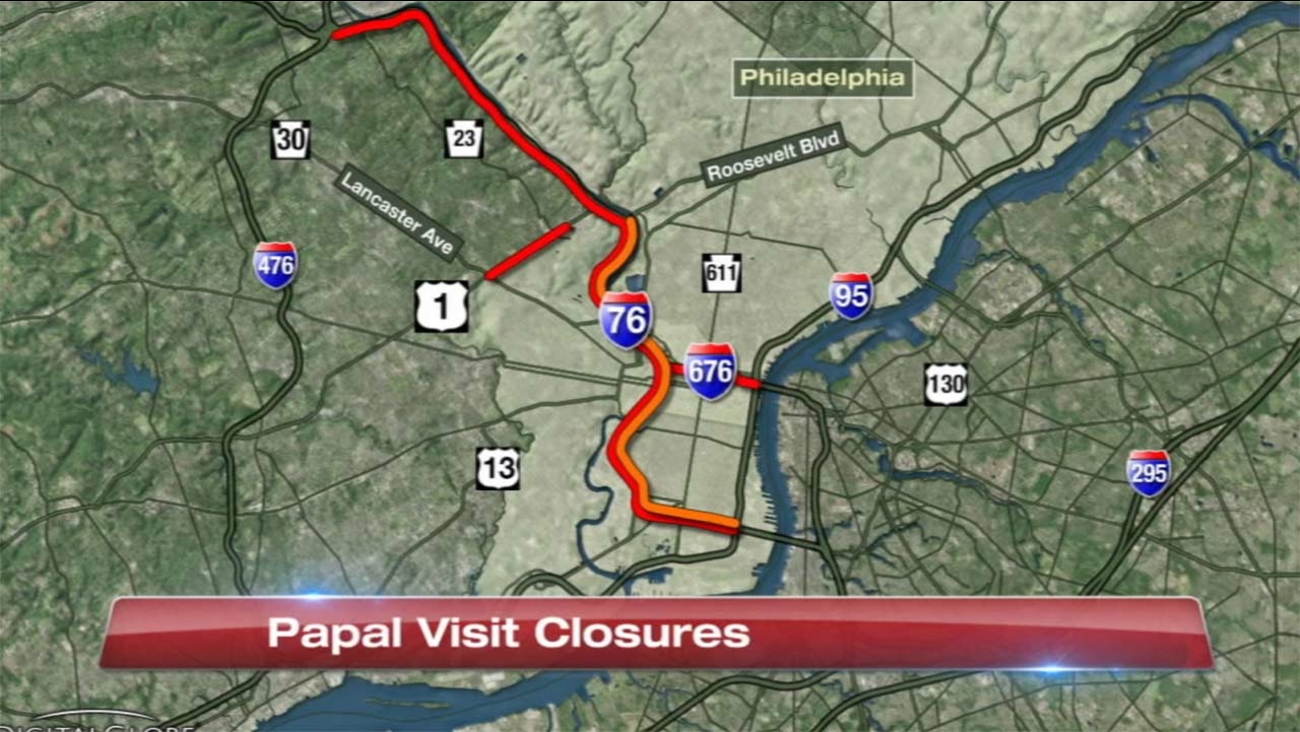 PHILADELPHIA -- Major highways and the Ben Franklin bridge will close and traffic will be restricted in the city before, during, and after Pope Francis' visit to Philadelphia.

In the city, the Ben Franklin Parkway is now closed in both directions so crews can continue setup for the papal visit festivities, and towing has started in restricted areas. Get more details here.

The following highway closures will start at 10 p.m. on Friday, September 25th:

*I-95 WILL REMAIN OPEN. However, all I-95 exits leading into the no-vehicle area will be closed due to the security perimeter from Broad Street to I-676. In addition the ramps accessing Washington Street and Delaware Avenue will only be open to registered bus traffic.

*The Ben Franklin bridge will also close to vehicular traffic on Friday, September 25th at 10 p.m. until 12 p.m. on Monday, September 28th. The only vehicles allowed will be emergency vehicles.

*The bridge will be used as a pedestrian crossing.

There will be authorized vehicle access roads for emergency vehicles only.

There will be no SEPTA bus service or trolley service within the traffic box.

Bicycle and pedestrian traffic WILL be allowed inside the traffic box.

It's not yet known if taxis will be allowed to operate inside the traffic box.

Boundaries are as follows for the Center City traffic box:

*South Boundary: South Street, from the Delaware River to the Schuylkill River

*West Boundary: Along the edge of the Schuylkill River, up Kelly Drive, stopping just below the Girard Avenue Bridge.

Boundaries are as follows for the West Philadelphia traffic box:

*East Boundary: Edge of Schuylkill River and the train tracks

Security Perimeters are being established around the Benjamin Franklin Parkway and Independence Mall, where Francis is expected to address large crowds.

PHOTOS: Map of security perimeter in Philadelphia for pope's visit

Thursday, September 24th at 10 p.m.: The Security Perimeter and the Secure Vehicle Perimeter around the Ben Franklin Parkway will go into effect and a fence will be constructed.

Friday, September 25th at 6 a.m.: Area between 12th Street and west to 20th Street will be open to pedestrians only. In the RED AREA pedestrians will need to be screened with magnetometers.

Friday, September 25th at 8 a.m.: Authorized vehicle access roads will go into effect. No other vehicles will be allowed.

Friday, September 25th at 6 p.m. in Center City and 10 p.m. in West Philadelphia: The previously announced Traffic Boxes will go into effect.

Saturday, September 26th at 6 a.m.: 20th Street west to the Art Museum and at Independence Hall - both will be open to screened pedestrians.

Saturday afternoon: After Pope Francis' speech at Independence Hall, there will be no screening in that area, but vehicles will still not be allowed in the Security Perimeter and Secure Vehicle Perimeter.

The Secure Perimeters will be in effect through Sunday night.

The itinerary for the pope includes eight public events in the city, including his arrival and departure from Atlantic Aviation.

The archdiocese is expecting a million and a half people to crowd the Parkway as the pope celebrates an open air mass at 4 p.m. Sunday.

Earlier in the day he will celebrate mass at the Cathedral Basilica of Sts. Peter and Paul. That will be an invitation only event with tickets issued to just 1,600 people.

The pope will be staying at St. Charles Boromeo Seminary on City Avenue. He will greet the seminarians there when he arrives Saturday.

Sunday morning at the seminary he will address the cardinals and bishops who will be in town for the World Meeting of Families. He will then head to Curran-Fromhold Correctional Facility in Northeast Philadelphia where he will meet with prisoners and select families.

LINK: See the FULL ITINERARY for the pope's visit. 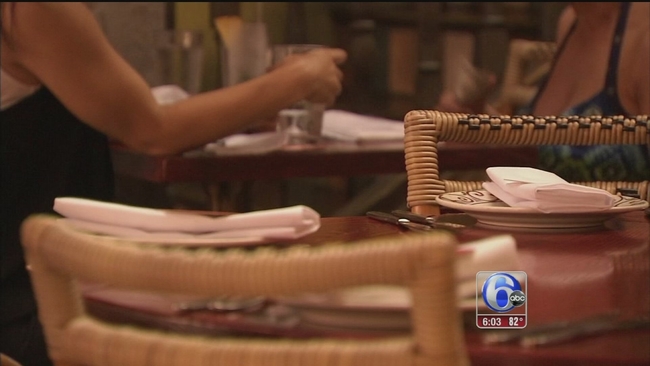