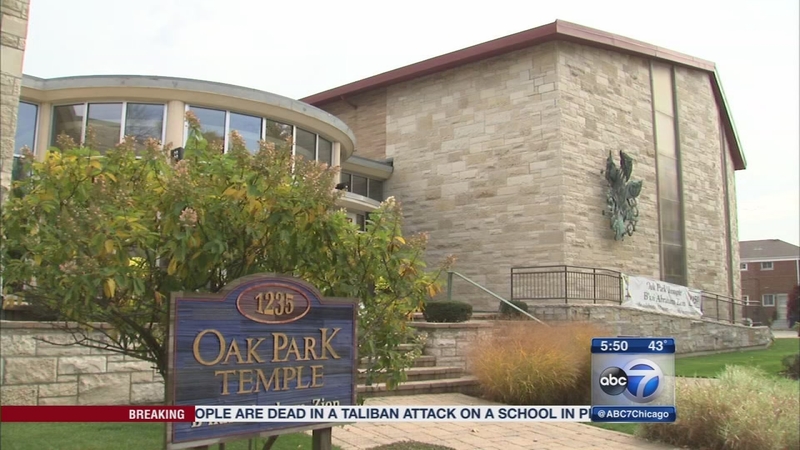 OAK PARK, Ill. (WLS) -- One of the only two synagogues to escape the Great Chicago Fire celebrates its 150th anniversary this year.

Oak Park Temple B'nai Abraham Zion is the second oldest Reform Jewish congregation in Chicago and has about 2,000 people.

"Our 150th anniversary celebration is a celebration of who we are, a recognition of where we've been and a chance to dream of who we want to be," Rabbi Max Weiss said.

Oak Park Temple began as Zion congregation in 1864. The first service was held in a rented Baptist church. With the city's growing Jewish population, Zion merged with the B'nai Abraham congregation in 1919, moving into a new building - Washington Boulevard Temple. Harold and Charlotte Stein first met there 75 years ago.

"For years, my mother kept pushing me. 'Why don't you take out one of those darling greenhut girls?' Because she did that, I wouldn't!" Harold Stein said.

Charlotte said Harold invited her to a college formal in Colorado Springs. Harold said she turned him down - twice.

"From that time on, she's been the most wonderful thing in my life. I thank the temple for bringing us together," Harold Stein said.

As Chicago's West Side began to change, the Jewish community moved to the western suburbs and broke ground for the new Oak Park Temple B'nai Abraham Zion in 1955.

"Younger families drew on the wisdom, history and experience of the old guards. The old guard recognized they weren't being pushed out, but that they were being welcome to provide their council," Rabbi Emeritus Gary Gerson said.

"When I came here in 1997, I had an infant and a toddler. My husband was a stay at home dad at the time. This was the first community we'd ever come to where there were lots of stay at home dads - in Oak Park," said Julie Yugend Green, Oak Park Temple's Cantor.

Green said there is a time capsule inside the cornerstone of the synagogue. The congregation hopes to remove it in the spring as one of their culminating events and replace it with items people find meaningful this year.

Oak Park Temple is planning a big gala in the spring around that time capsule event. They are currently collecting stories, artifacts and other memorabilia from members of the congregation, which are on display online and at the temple.