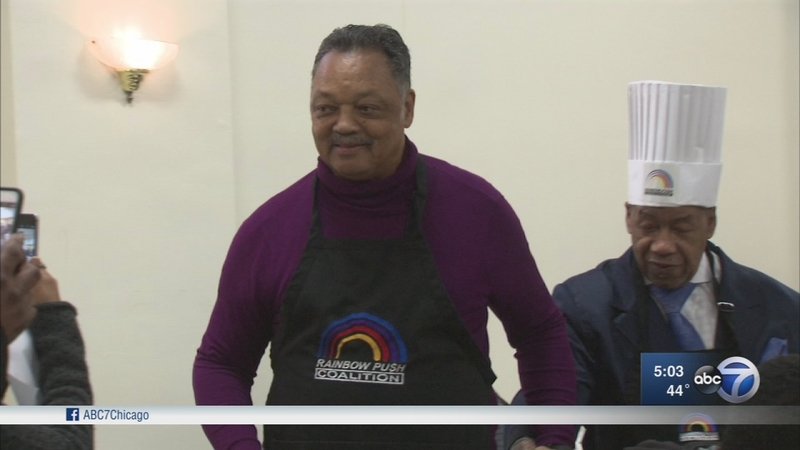 CHICAGO (WLS) -- Reverend Jesse Jackson gave thanks for the support he has received in the wake of his Parkinson's diagnosis while he served Thanksgiving dinner Thursday at the Rainbow Push Coalition National Headquarters.

The dinner was the first time Jackson has spoken publicly since he his diagnosis November 17.

"So many people have been affected by this disorder and they need a voice," Jackson said at the event. "I want to share and be a part of that voice."

Parkinson's is a disorder of the central nervous system that affects movement. Jackson said he has had symptoms for years but was in denial.

"For a long time you get the symptoms before you get the diagnosis,"Jackson said. "You find yourself stumbling up stairs, you're not clumsy, you are just not picking your feet up. People say talk louder, and you think you are talking loud, but you are not."

The disease runs in Jackson's family.

"It's a progressive disease," Jackson said. "My father had it. I didn't recognize he had."

Jackson said he is thankful for the support he's received in Chicago and across the world since he announced his diagnosis.

"People have been calling from Australia, from Britain and Africa, places we have worked across the years," Jackson said. "I am just overwhelmed at the response."

Those who have known Jackson attended the dinner to show their support.