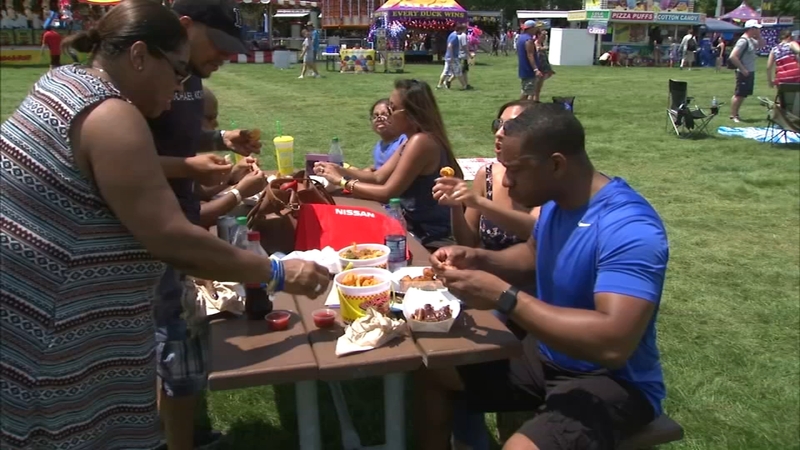 NAPERVILLE, Ill. (WLS) -- Ribest in Naperville was off, then back on, then off again Wednesday evening as threatening weather dampened the Fourth of July festivities.

The festival was temporarily evacuated due to lightning just before 6 p.m. Ribfest reopened at 7:30 p.m., but closed again around 8:55 p.m., when safety officials determined there were threatening weather conditions.

Naperville safety officials have determined the park must be closed due to threatening weather conditions. Please begin leaving the park. The storm appears headed to Naperville around 9:15pm. Thank you for your cooperation.

Fireworks are rescheduled for Thursday, July 5, at 9:30 p.m.

The ribs are the star of the show here: Slab after slab is smoked, sauced, sliced and served up to a hungry crowd.

"You have a tremendous variety, from Memphis to national champions so you can sample them and find out which you like best," he said.

And the competition is fierce.

"If I don't let the other guys win every now and then, it's not a competition," said Jim Clayton, of Texas Outlaw Barbecue. "They cry a lot."

You can find good barbecue and some of the best music acts in Naperville at Ribfest.

"When they come back when you're on that grill and it's really hot, and they say, 'These are awesome ribs,' it's nice to hear. It's a nice feeling," he said.

The pros also offered advice to beat the heat.

"Lots of water, lots of shade. Maybe a fan to cool yourself off," one cook said.

"Drink a lot of water and I gotta keep in the back of my mind, 'It's ok Mark, you're going to lose 10 to 20 pounds this whole time, so it's ok,'" Link said.
Ribfest is about something bigger than food, too. The event is a major fundraiser for the Exchange Club of Naperville, which has raised more than $16 million over 31 years and invested it back into the community to fight domestic violence and more.

"Prevention of abuse, domestic and child abuse and we support so many agencies -- over 50 right here in the community," said Robin Choquette, president of the Exchange Club of Naperville.

As a survivor, Rena Cooper knows first-hand the difference positive advocates can make in dangerous situations.

"So to know that these dollars are going towards that, it does something inside of me to make me feel happy because somebody's life will be saved. Some child will be not abused anymore or taken out of a home where abuse is there," she said.

Ribfest runs through July 7 and there is lots to look forward to. For more online ticket and event information, visit www.ribfest.net.