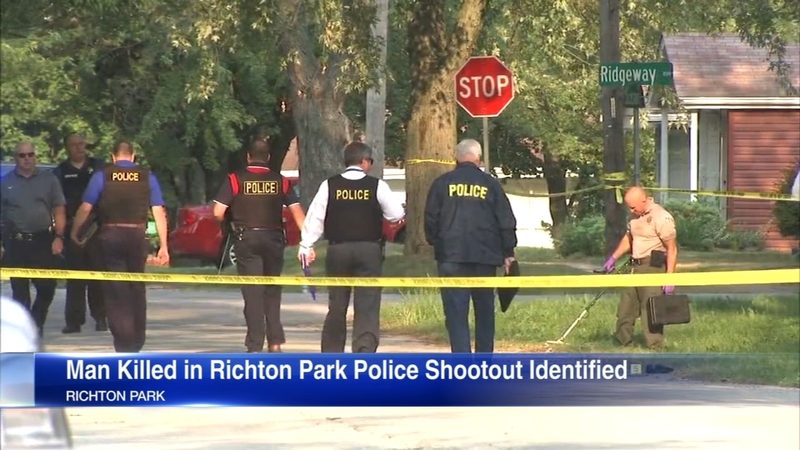 RICHTON PARK, Ill. (WLS) -- Authorities have identified the man killed in a shootout with police in South Suburban Richton Park.

Police said Mark Harvey, 32, was a suspect in a shooting earlier in the day in Park Forest who was later killed by police as they attempted to arrest him.

The whole thing began Monday afternoon when police received reports of a man with gunshot wounds to the head in Park Forest at approximately 2 p.m., Park Forest police said in a statement. Officers dispatched to the scene found the victim seriously injured, who provided a description of the gunman.

The victim was taken to Christ Hospital. It is possible he was shot during an armed robbery.

An offender matching the victim's description was found in Richton Park and was confronted on foot by three Park Forest officers and one officer from Richton Park, police said.

Park Forest Chief of Police Christopher Mannino said the suspect, later identified as Harvey, refused to comply to officer demands and displayed a firearm. Harvey and police then engaged in a shootout as they ran down a city block that ended with the suspect shot, Mannino said.

A weapon was recovered at the scene, police said. No officers were injured.

Park Forest Police said the officers involved in the shooting will be placed on administrative leave pending investigation.

Officers from both the Park Forest and Richton Park police departments responded to the scene.

Neighbors witnessed the aftermath of the shooting. Residents at a nearby condo building said their building was hit by multiple bullets.

"At first I thought it was fireworks, but then when I heard it consistently, I know fireworks aren't consistent like that. I knew it was gunshots," Tarwick said.

"Cops had to do what they had to do to protect themselves, but it was a multitude of shots," Tarwick said.

Harvey's relatives said he didn't own a gun and was known to police because he was mentally ill. Neighbor Cindy Moore said he had challenges but was not dangerous.

"I don't even think he had the mental capacity to even know what to do with a gun, let alone have one," Moore said.