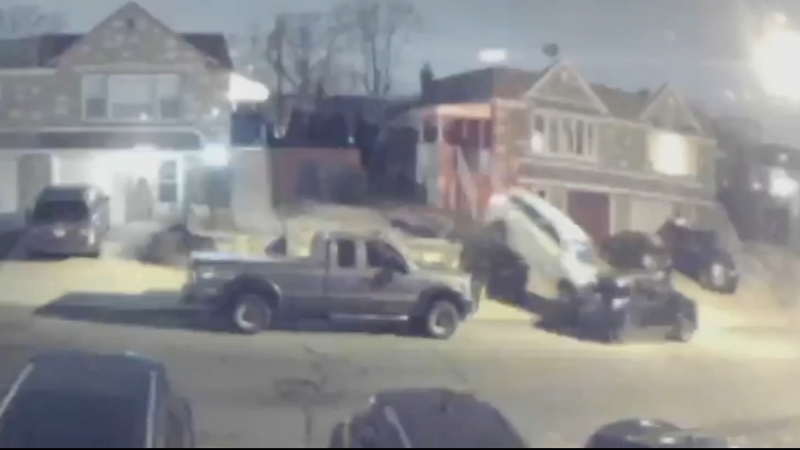 PHILADELPHIA -- Home security video captured an out-of-control driver plowing through a Northeast Philadelphia neighborhood, leaving behind a path of destruction.

It was a midnight jolt a local family was not expecting. They said, from out of nowhere, an SUV literally rocked their world and they still can't believe what their cameras captured.

They are even more amazed that there were no injuries.

Ring video captured a scene that would upset any homeowner.

An SUV was captured driving out of control and caused tons of damage.

Mimi and Nate Fagan were the unlucky homeowners, and their cameras captured the chaos.

"My husband ran out the door outback. He was already coming through the side. My son and I got to the window, and we saw him coming off the wall, right into our jeep. It was something out of Fast and Furious," said Mimi.

What appeared to be a white SUV was unstoppable, the couple said.

"It looks like a Dodge Journey, which I never thought was a good car. Now, after I saw it go over my wall, that might be something to get for the next vehicle," said Nate.

"I don't know how he stayed straight enough to not hit anything else. We are very fortunate and feeling very blessed right now," said MiMi.

Neighbors tried to track down the driver but had no luck. By the time officers arrived, the out-of-control SUV was gone.