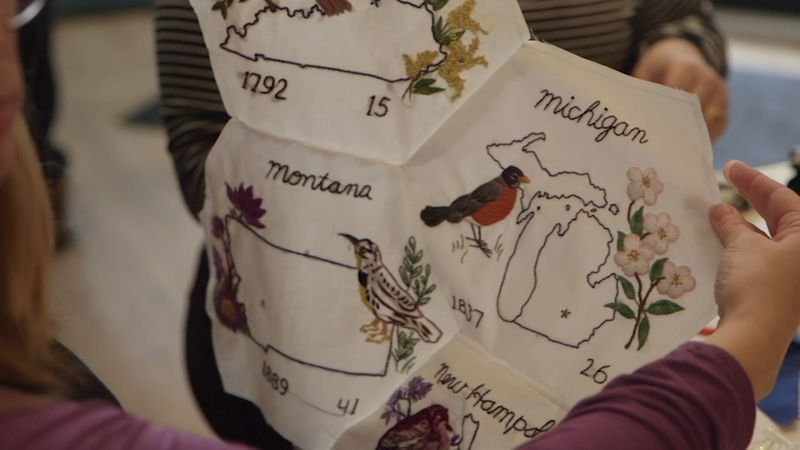 CHICAGO (WLS) -- A Rogers Park artist and activist has brought together a global community through one unfinished quilt and a hashtag: #RitasQuilt.

Much of Shannon Downey's work begins at estate sales, where the self-described "craftivist" seeks out unfinished craft projects to complete.

"I can't leave it," Downey said. "I buy them up and then I finish it the way that I think they would want it finished."

Downey studies the work of the deceased crafter to ensure consistency of quality and style. When the project is finished, Downey hopes, the original artist can rest in craft-peace.

But in September, she encountered her largest ever unfinished project: a quilt of the 50 states' official birds and flowers, 50 blue stars, and a U.S. map at the center.

Downey had never quilted before and knew the level of intricate embroidery would take her a lifetime to complete. Through her Badass Cross Stich brand, she went to the internet for help.

"I thought, 'Well I'll ask Instagram. I'll show them some pictures, and then definitely I can get a couple of stitchers who can help me do this," Downey said.

Between 50 stars and nearly 50 unfinished states, there were too many volunteers to include everyone. Downey shipped quilt hexagons to over 30 states and 2 Canadian provinces.

As each team member worked on their individual piece, several began their research on the original crafter. All the information they had to start was an address, age and name: Rita Smith.

Stitchers took to ancestry websites and found everything there was to know. Rita had been a school nurse her entire life, her husband was a teacher, and their son still lived in the Chicago area.

More of Rita's personality came through in her stitching style. She loved French knots, an especially intricate and time-consuming style. She marked patterns with a sharpie, as opposed to the usual pencil, showing serious confidence in her work and increasing the level of difficulty for each artist.

Rita Smillie's high school yearbook photo is accompanied by the quote, "With a smile for everyone." Photo courtesy of Shannon Downey.

Each volunteer brought a bit of themselves to the project. Heather Kinion used some of her great aunts' cloth. Sarah Tafelsky altered the Michigan pattern design to more accurately represent her state flower.

Downey's father completed one star as his first-ever embroidery project.

After two months of coordination, the team behind Rita's Quilt began cutting hexagons with members of the Modern Quilting Guild.

Sarah Evans, a Chicago-based professional quilter, will finish the quilting this week.

"This is a much bigger quilt than any other because it's so much more collaborative," Evans said.

On December 7, volunteers gathered for a piecing party at Wishcraft Workshop in North Center, stitching together every hexagon into a completed quilt top.

"We were like, 'When you're ready, we will host a party to put this thing together," said Kristina Betke, the Chief Magic Maker at Wishcraft. "So we are hand-piecing this quilt top."

The room was packed with volunteers from Rita's Quilt community and media. As the group neared completion on the quilt top, Downey spoke about the importance of honoring women's work and art.

"Rita was just a normal person, and we're just normal people," Downey said. "It's wildly honorable, and it's worth there being artifact and memory and story around."

The finished quilt includes two hexagons and a U.S. map that Rita had completed before her death.

Rita's Quilt will make it's public premiere at Woman Made Gallery in Pilsen on December 21. It is then headed to the National Quilt Museum in Paducah, Kentucky, where it will stay on display through their annual quilt show at the end of April.