1 killed after car crashes into semi in south suburban Riverdale 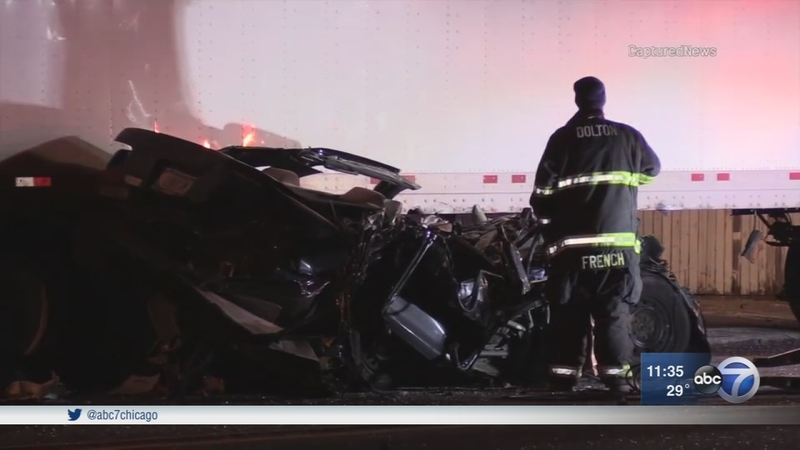 1 killed after car slams into semi in Riverdale

RIVERDALE, Ill. (WLS) -- At least one person was killed and another seriously injured in a crash with a semi in south suburban Riverdale Wednesday morning.

The crash occurred around 1:30 a.m. near 145th Street and Indiana Avenue.

The roof of the Toyota Avalon was ripped off on impact, with the car seats exposed in the middle of mashed, twisted metal. The car became wedged underneath a parked and empty semi-truck.

The Toyota slammed into the truck from behind as it was trying to pass a man who did not want to be identified.

"My belief is that he had to have been either coming around the trailer trying to speed around the parked trailer and trying to get around me," he said.

He also said that when he heard the crash, he stopped his truck and ran over to the car which quickly caught fire with the driver trapped and the passenger dead.

"A tow truck driver was coming past. He got out with his fire extinguisher. He extinguished the fire. We stayed next to the car until the paramedics came," the witness said. "The driver was asking for help and I was telling him to be cool, be calm. I had somebody coming. I was just fearful of moving him because I thought that it might cause further damage."

Investigators spent hours picking apart the scene and clearing away pieces of debris. The passenger was pronounced dead at the scene and the driver sustained serious injuries and was transported to Christ Hospital.

Riverdale police said the car was traveling at a high rate of speed. Police said the driver is being investigated for suspicion of driving under the influence of alcohol.

"I'm sad. I'm sad for the families that have to get the news that one child is in critical condition and one child is not coming because they were young boys," the man said.