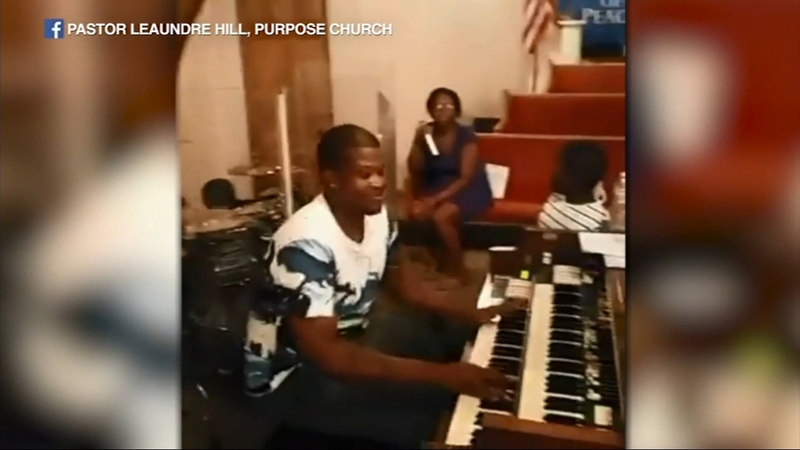 ROBBINS, Ill. (WLS) -- A Midlothian police officer is on administrative leave after he fatally shot a 26-year-old nightclub security guard this weekend in south suburban Robbins.

The guard, identified as Jemel Roberson, was shot at about 4 a.m. Sunday at Manny's Blue Room, where police from multiple agencies in the south suburbs had responded to reports of shots fired.

Roberson's family filed a federal lawsuit on Monday, calling the shooting "unprovoked" and "unjustified." The complaint said that Roberson had "apprehended one of the perpetrators outside the bar."

A vigil was held Monday evening to remember Roberson, an organist who performed at multiple Chicago area churches.

"Why? Why did you kill him?" his cousin Candace Ousley asked. "It doesn't make sense."

The shooting has sparked an outcry in the south suburbs, where some view the incident as a case of racial bias.

Roberson's family has hired an attorney who is looking for answers

"Jemel was trying to save people's lives. He was working security. A shooting had just taken place inside the establishment. So he was doing his job and holding onto somebody until somebody arrived. And a police officer, it's our feeling didn't make the proper assessment and fired and killed Jemel," said attorney Greg Kulis.

"The police officer just saw a black man," Ousley said. "I believe if he was indeed white, he'd be alive."

Roberson grew up in Chicago's Wicker Park neighborhood where his lifelong friends remember him as someone who was always a protector.

"If anyone would mess with me or anything he would step up. He was more of a brother than a friend," said friend Angelina Markin.

Relatives said he had recently become a father and wanted to become a police officer.

"He got his life took by people he looked up to, who he wanted to become," Ousley said.
Authorities are investigating what led up to the shooting. Four other people were shot, sustained non-life-threatening injuries. The sheriff's office also said at least one of wounded was considered to be a shooter, who is now in custody.

The shootings started with an argument inside a bar. Midlothian police said the responding officer shot Roberson after he saw him with a gun. It was immediately unclear whether the officer identified himself before discharging his weapon.

The Midlothian police officer who shot Roberson was a four-year veteran of the department.