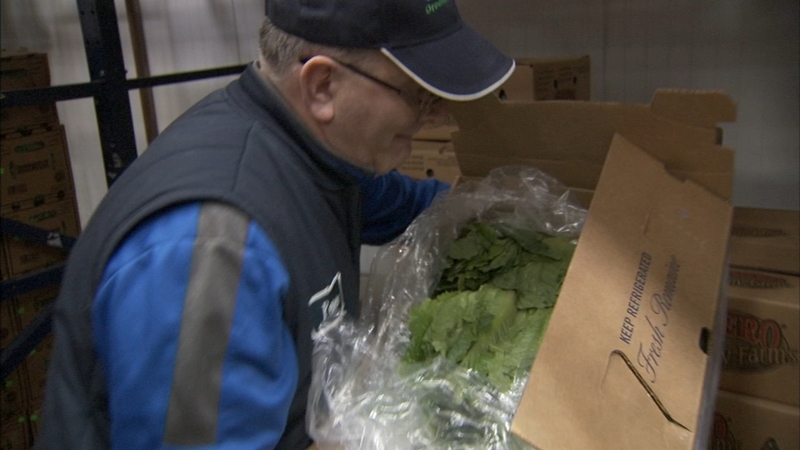 CHICAGO (WLS) -- The CDC is warning consumers not to eat any romaine lettuce due to possible E. coli infection. While it might be an inconvenience for a lot of Americans, it's a big loss for a business.

In the shadow of the old Chicago Stockyards, an environmentally-conscious food service wholesaler is wondering who's going to pay for the hundreds of thousands of dollars of romaine lettuce he now has to throw out.

"The problem is from Salinas, California. It started on October 6 and went to October 28," said Peter Testa, of Testa Produce. "They didn't say anything about Yuma being a problem, they just said there is a problem with all romaine."

Testa's century-old business has warehouses full of fresh romaine hearts and mixed salad containing romaine that now can't be shipped to area restaurants and grocery stores -- on the busiest weekend of the year for them, and him.

"And so by doing that, it is kind of a disservice to everybody and they don't realize the effect that will have on the entire country. You are talking about millions of dollars that could possibly go by the wayside unless they get their act together real quick and start coming up with more specifics because they haven't done that yet," Testa said.

On Wednesday, the CDC said romaine lettuce is unsafe to eat in any form in response to a new outbreak of illnesses caused by a particularly dangerous type of E. coli bacteria. Thirty-two people in 11 states have become sick from eating contaminated romaine. Of those, 13 have been hospitalized.

"We spend thousands of dollars, hundreds of thousands of dollars, on safety every year and that is not a problem. But you have to have a little bit of a A, B, C, D rule that goes with that and that should be part of it also. It's not by the seat of your pants, all of a sudden making blanket statements," he said.

Testa's losses will likely be borne by him, since this is an advisory from the CDC and not a product recall, in which case insurance might pay for losses.

Right after the announcement, the wholesale price of regular lettuce shot up from $25 to $42 per box in Chicago - and that's if you can get it.