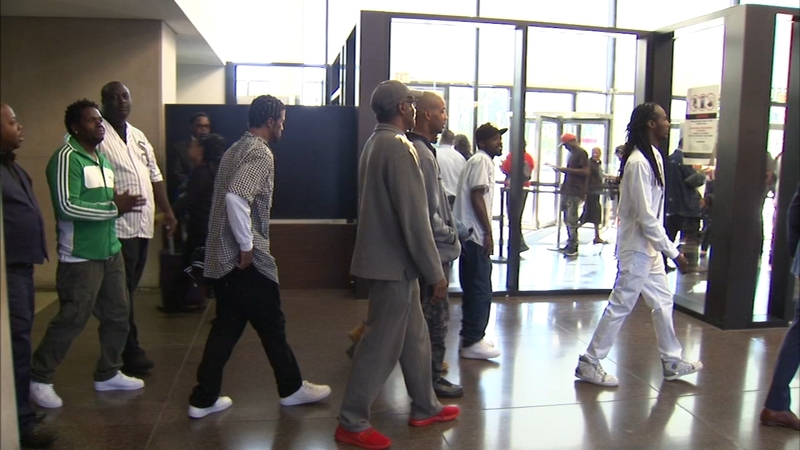 CHICAGO (WLS) -- Eighteen people who were convicted of crimes tied to a corrupt former police sergeant were exonerated Monday.

A total of 42 convictions linked to Chicago Police Sergeant Ronald Watts have been overturned after Monday. The latest reversals are drug cases from between 2003 and 2008.

The defendants all served sentences ranging from probation to four years in prison.

In 2012, Watts and Officer Kallatt Mohammed were federally indicted and later pled guilty to taking a bribe from an informant. Since then new documents revealed Watts and his team planted evidence and fabricated charges on South Side residents.

As each person's conviction was overturned and they prepared to leave thecourtroom, Cook County State's Attorney Kim Foxx shook their hands.

"The system owes an apology to the men who stand behind us. What we know about what was happening with Sgt. Watts, the way that he ran his operation, were that there were many men and women who fell victim to his corrupt ways," Foxx said.

Monday, some of the men who had their charges dismissed and their attorneys spoke.

"I'm just happy that I'm able to move forward with my life," said Martez Wise, who had charges against him dismissed. "It's been four years out of my life that I had to be away from my family and kids. I'm not the only one that had to suffer. I mean, they had to suffer too because I had to be away from them. I'm just glad that we're at this point."

"Those officers were allowed to remain on the street and make these mass arrests over and over and over again for close to a decade and that's why we're in this mess and that's why we're lucky to have a state's attorney's office who is willing to finally keep the promises to clean up police corruption and start to get a measure of justice for went on for so long," said attorney Joshua Tepfer with the Exoneration Project.

"Those officers used people in the Ida B. Wells homes for over a decade and put cases on people who didn't cooperate with their corrupt scheme, took bribes, stole money and drug from drug dealers, and really ruined the lives of dozens, maybe hundreds," said attorney Joel Flaxman.

The first mass exonerations tied to Watts and his team happened back in November. Since then 15 current Chicago Police officers connected with Watts' tactical team were put on desk duty and the Cook County State's Attorney's office said they will no longer use testimony for officers tied to Watts.

However, the fact that those connected to Watts are still on the force at all was troubling for those recently cleared of charges.

"It's scary knowing that they still on the force, and like I said, they figured that Watts don't have connections. Quit playing. Watts got connections because he went as far to do all of this, to organize all of this. It's far beyond Watts," Wilbourn said.

According to attorneys with the Exoneration Project, Watts was linked to some 500 convictions and currently they are vetting more cases related to Watts as new information continues to pour in.