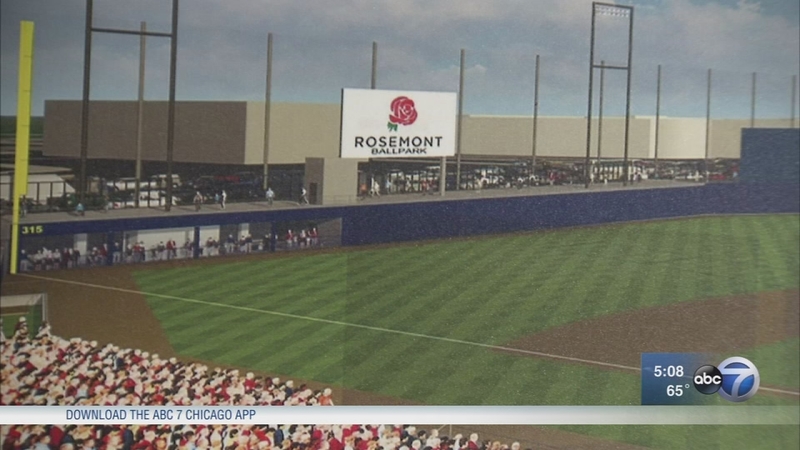 ROSEMONT, Ill. (WLS) -- Chicago is a baseball city. Now, a new team is coming to suburban Rosemont a year from now. The still-unnamed minor league team will play in a new facility in the village that is known for entertainment.

With a flashy video, baseball impressarios shared details of their $60-million project to situate an American Association of Independent Professional Baseball expansion team in a new 6,300-seat stadium. It's another expansion for Rosemont.

"It is not just a landlord-tenant relationship, it is about building partnerships and long-term relationships," said Rosemont Mayor Brad Stephens.

Rosemont Entertainment Group's Steve Gluckstern used to own the NHL's New York Islanders. Shawn Hunter was an NHL and NBA executive, starting with the Minnesota Timberwolves 26 years ago. Their vision is to offer fan-focused experiences up close to the action, the culmination of a life's work in sports.

"It is affordable it is fun they can keep coming back for me it is kind of the ultimate gift back in sports that has been a great career for me," Hunter said.

With minor league baseball available in Kane County, Joliet and Gary, Indiana, Rosemont's backers promise there will be lots to watch.

"There are ten starters from the American Association playing in Major League Baseball, so the level of play is fantastic," Hunter said.

Rosemont had more than preliminary talks with the Chicago Cubs about relocation. When that turned into a swing and a miss, the diamond dream -- and what it could mean for a city Travelocity ranks number 21 out America's 50 top entertainment districts -- took on new urgency.

"There is nothing that is off the table we will look for every event we can," Mayor Stephens said.

They will have a name by the time of the first pitch, which is May of 2018. The level will be somewhere between A and AA ball.

The owners say big league success has led to minor league success in all sports -- look at the attendance for the Chicago Wolves and Chicago Sky for example.

There will be private boxes, of course, but this is about families. Hunter said that a family of four will be able to come out for a day at the park for $50 -- that's tickets, parking, something to eat and drink for everyone and a souvenir.
Related topics:
sportsrosemontbaseball
Copyright © 2021 WLS-TV. All Rights Reserved.
TOP STORIES
Women targeted in Lakeview robberies
Prosecution rests case in Smollett trial after brothers testify
School shooter possibly had gun in parent meeting before rampage
Larry Eyler victim ID'd 38 years after remains found in Jasper Co.
US Army, FAA investigating military flyover of NFL game
Alec Baldwin says he's not responsible for fatal 'Rust' shooting
Family says mysterious falling ice leaves gaping hole in roof
Show More
AG Raoul to announce update on organized retail theft
CPD releases video of fatal Lincoln Square shooting
Shooting damages South Side cookie shop, delays opening
Sam's Toy Box: Toys to help kids discover what to be when they grow up
Chicago Weather: Light rain early, then sunny Friday
More TOP STORIES News