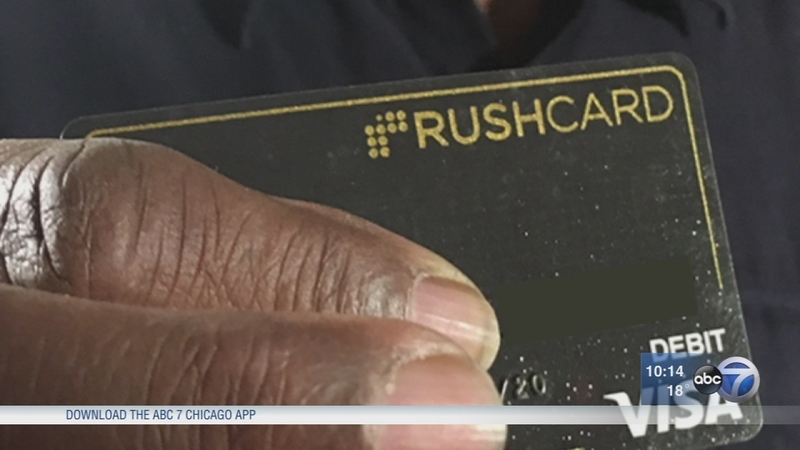 CHICAGO (WLS) -- You trust that your bank will protect you if your account is compromised by fraud, but some customers said they had trouble getting refunds when criminals stole their paycheck money from pre-paid Rush Cards.

The cards are FDIC insured and are like virtual banks, but these customers said they still had to deal with a fraud dispute denial.

"If it weren't for friends and family that I borrowed money from, I wouldn't be able to make it," said Reginald Terry.

Terry uses Rush Card to get his social security money early. Rush Card provides the service by using electronic deposits and paycheck deposit history. But Terry said that convenience almost cost him dearly after he lost $761.

"I'm a month behind in my rent and if it wasn't for my landlord being a good friend of mine I'd probably be on the street by now," he said.

Terry said someone hacked his Rush account online and transferred his social security check from his card to another Rush Card, then used the money.

"So I called customer service and they said the money had been loaded, but it has been withdrawn, they did a card to card transfer, and I said how can that be? I'm sitting in a dialysis chair," Terry said.

His claim was eventually denied after submitting a police report and a transfer dispute form.

"But now they claim that the investigation is closed. I don't know what kind of investigating they did, but they did a very poor job of it," he said.

So Terry called the I-Team. Weeks after the I-Team contacted Rush Card, his refund was approved and the $761 check is being sent to him.

Krystal Howse has a similar story.

A Rush Card spokesperson told the I-Team that Howse never filed a rebuttal, so she tried again and added a police report. Days later the claim was approved and she received a full credit.

Jason Knowles: "Do you think you would have been more protected with a traditional bank?"
Krystal Howse: "Yes, because they would have investigated it, saw that it wasn't me, and I would have my money back and we wouldn't be having this conversation."

Rush Card said it follows strit laws and guidelines from the Federal Reserve. However, the I-Team found how banks follow rules may vary.

Rush Card wouldn't disclose its specific policy on police reports, but Chase and First Midwest banks tell the I-Team they usually don't require them, and that police reports are not required by the FDIC.

And what about a reversal of charges to your account pending a bank investigation? The American Bankers Association said "provisional credits" or a completed investigation with a decision in writing are legally required within 10 business days. Chase and First Midwest said they usually issue them immediately.

However, the I-Team's two customers were not given them because Rush Card said their initial claims were legally denied within 10 days.

"I feel like if I hadn't come to you, I feel like it would have been swept under the rug and my $223, I was just supposed to forget about it," Howse said.

Rush Card, which is owned by the Green Dot Card, said both cards have more than 5 million active users, and they're becoming more popular for people who may not qualify for a traditional bank account.