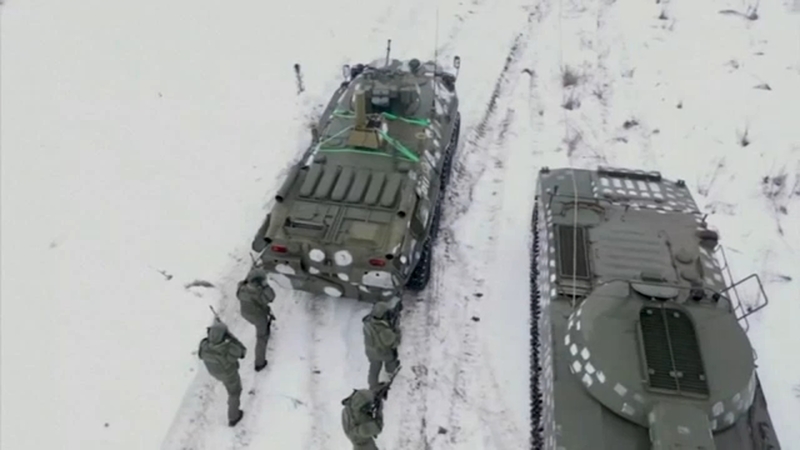 CHICAGO (WLS) -- The Pentagon is now putting 8,500 troops on heightened alert for possible deployment to bolster NATO forces as tensions continue to grow between Ukraine and Russia, and the West.

But how did we get here and why?

Many at Chicago's St. Nicholas Ukrainian Catholic Church are praying for peace in their home country, as they do every day. With over 100,000 Russian troops amassed near the Ukrainian border, Father Serhiy Kovalchuk has been keeping in close touch with military members back home.

"Of course, they don't want this war, but if Russia will start -- we will respond," he said.

For 103 years, Ukraine has maintained its independence from neighboring Russia and Kovalchuk said the Ukrainian people have lived with Russian threats for years.

While the latest threats may be more heightened, Ukrainian's ambassador to the United States said during a visit to Chicago Sunday that Ukraine will not be deterred.

"We are very peaceful. We do not attack, but an offensive, we will defend what is ours," said Oksana Markarova, the Ukrainian ambassador to the U.S.

Some Ukraine/Russian experts predict Vladimir Putin will not invade.

RELATED: What to know about possible invasion, US involvement

"I think this is all about signaling," Farkas said. "It's all about Vladimir Putin feeling like he has been ignored or pushed aside a bit and what's to reassert his influence in the region."

Influence that includes Putin's desired control over Poland, the Baltic nations and other countries.

"This man cannot accept the fact that these countries want to be independent, not dependent on Moscow," said Senator Dick Durbin (D) IL.

The United States government stands strongly behind Ukraine, as the Biden administration puts thousands of troops on high alert.

The Ukrainian community in Illinois is about 200,000 strong. Ukrainians said they are grateful for the support of the U.S. and that they are confident the latest tension will be solved through diplomacy rather than war.
Report a correction or typo
Related topics:
politicschicagoukrainian villagerussiaukraineu.s. & world
Copyright © 2022 WLS-TV. All Rights Reserved.
UKRAINE
Russia's claim of Mariupol's capture fuels concern for POWs
Britain: Russian troops likely to redeploy from Mariupol
Red Cross registers hundreds of Ukrainian POWs from Mariupol
Actor Liev Schreiber hosts event in D.C. to raise money for Ukraine
TOP STORIES
Security guard hurt after confrontation at suburban Walmart: police
Security guard shoots man in buttocks at Millennium Park
Chicago mass shooting victim ID'd as father of 2, with twins on way
'Absolutely terrified' teen boy dies hours after 'sextortion' scam
Chicago police warn of robberies on Near North Side
Some peanut butter recalled for potential salmonella
At least 1 dead, 44 injured after tornado strikes northern Michigan
Show More
First formula flights from Europe to arrive this weekend
3 wounded in separate shootings on South Side, Chicago police say
9 shot, 2 fatally, on Near North Side
Dog battles mountain lion to save owner's life
Roz Varon's Weekender Report
More TOP STORIES News