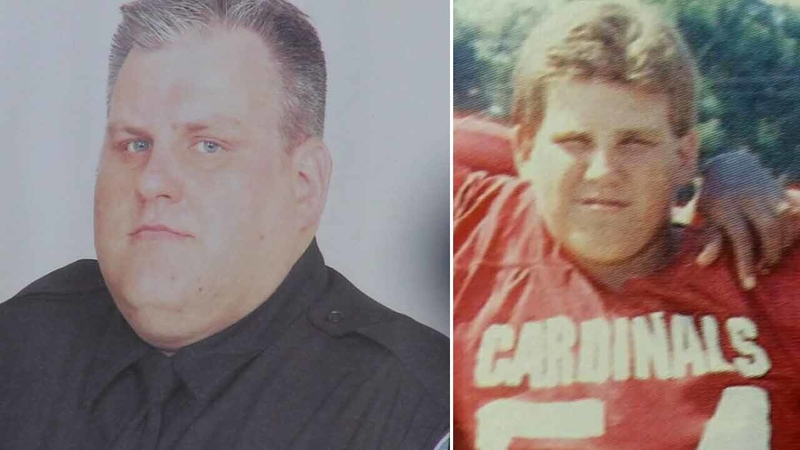 ONTARIO, Calif. -- A 12-year-veteran of the San Bernardino Police Department and father of three was fatally struck by an alleged DUI driver while on duty Thursday morning, police said.

Friends and family held a fundraiser for the police officer, who was a former San Bernardino High School student, after he was killed by a suspected drunk driver.

Police officers from several agencies and friends gathered at Shamrock's Bar and Grille Friday night for the memorial organized by the Emerald Society, a group that raises funds for the families of fallen officers. Bryce Hanes, who did not drink, was honored with a Dr. Pepper toast.

"We don't drink but we drink Dr. Pepper," said Hanes' brother Scott Hanes. "That's Bryce's favorite drink so, tonight, we have Dr. Peppers for everybody."

Hanes was killed when police say 27-year-old Archie Green ran a red light and slammed into the officer's squad car.

"Such an amazing man, not only as an officer, as a friend as a beat partner at work," said Ray Bonshire of the San Bernardino Police Department. "Just an example, as he showed to us, all of us, how to live your life."

With heads bowed, students at San Bernardino High School took a moment to mark the passing of Hanes, who graduated in 1993 and played football for the school.

"As a tribute to officer Hanes, Cardinal City is dedicating this year's 100th anniversary to Officer Hanes and his family," said Chuck Oversby, a teacher at San Bernardino High School.

"He was a man of stability, a man of love, a man of a lot of fun," said Michael Stronger a friend of Hanes' and member of the Church of Jesus Christ of Latter-Day Saints. "His life was exemplary of his faith."

Two different memorial funds have been set up by the Emerald Society and the San Bernardino Police Officers Association to assist the victim's family as the outpouring from the community and different law enforcement agencies continues to grow.

"We love the Hanes family," said Stronger. "And we are going to miss him dearly."

For now, the community is doing what it can to help the officer's family as they begin a life without him.

"It's surreal to think that he's gone. But to look around and see the variety of people that are here, and the only reason they're here is for Bryce, it's just an awesome thing," said Scott Hanes. "I miss him."

The two-vehicle crash occurred at 2:07 a.m. at Etiwanda and Fourth Street in Ontario, just outside of the Auto Club Speedway.

Officer Hanes had just dropped off an arrestee at West Valley Detention Center in Rancho Cucamonga when he was broadsided by a 2008 Dodge Charger, San Bernardino Police Chief Jarrod Burguan said.

Burguan said Hanes had the right of way and the alleged DUI driver ran a red light while heading east. The collision sent Hanes' squad car across the intersection.

"We do have an eyewitness to the collision that indicated that the officer did have a green light at the time of the collision and that the other driver did run a red light," Ontario police Det. Bill Russell said.

Hanes suffered massive injuries and was rushed to Kaiser Permanente Fontana Medical Center, where he was pronounced dead.

The alleged DUI driver was also transported to a local hospital with minor injuries. He has since been released from the hospital and charged.

Hanes, of Redlands, leaves behind a wife and three children under the age of 12.

"Bryce was one of those guys that came to work every day with a great attitude. He got along well with all of his coworkers. He really loved his job, and he loved what he did," Burguan said.