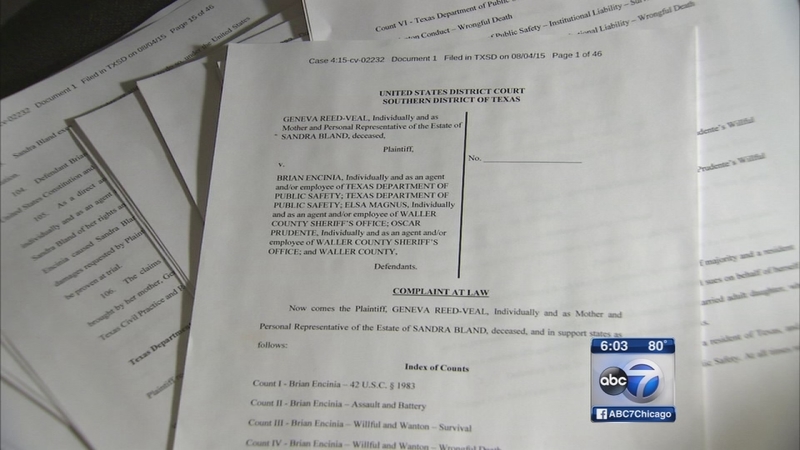 The wrongful death lawsuit was filed against the Waller County Sheriff's Office, two jailers, Trooper Brian Encina and others. It seeks unspecified damages.

"What happened to my daughter? What happened to Sandi Bland?" Geneva Reed-Veal said during a news conference on Tuesday. Her family filed a 46-page federal lawsuit in their effort to get information in her death.

"Candidly, we were unable to get many of the answers that we have been asking for," Cannon Lambert, Sr., said.

Bland, 28, was found dead in the Waller County Jail on July 13, three days after she was arrested by Encina during a routine traffic violation in which their exchange escalated to the point that he placed her in handcuffs.

The medical examiner ruled her death a suicide by hanging, which the family rejected in the beginning. The results of a second, private autopsy have not been released, and the family feels that the county is withholding information from the examiner.

"I am still confident in the fact that she knew enough about Jesus that she would not take herself out," Reed-Veal, Bland's mother, said. "If the facts show without a doubt that was the case, I'll have to be prepared to deal with that."

Her family believes those answers can be provided if the Department of Justice gets involved in the investigation.

The Texas county released several videos of Bland and her jail intake papers. Reed-Veal said she watched the video of her daughter's arrest once.

"I will not watch it again. Anger. Disgust. Disappointment," she said.

The family accuses Encina of battery and says he violated Bland's constitutional rights. They want to him fired.

The lawsuit also argues that the sheriff's office and guards are liable for failing to protect Bland while she was in custody and accuses them of inadequately supervising "potentially suicidal" inmates.