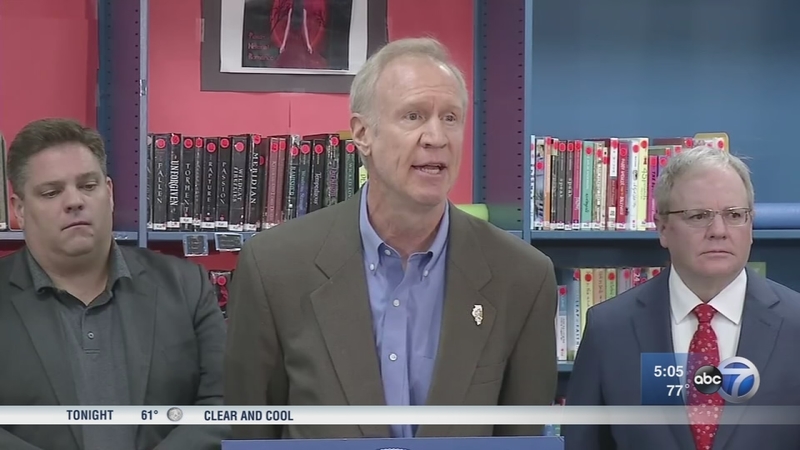 SPRINGFIELD, Ill. (WLS) -- Gov. Bruce Rauner is now calling on the leaders in Springfield to release a bill that reforms public school funding in the state.

He's threatening to use another tactic he says will give even more money for more classrooms.

The governor says he will not sign into law a new school funding formula bill unless money is moved from Chicago Public Schools to other districts.

The bi-partisan Senate bill 1 fixes what many say is a decades-old broken education funding system.

With a school year set to begin in a few weeks, superintendents from around the state strongly support it.

Lake County school superintendents hope a new state funding formula will promise more equity among all school districts, regardless of their zip code.

"No district loses money, I can tell you from my districts prospective in particular it was important for us to make sure there was no Robin Hood scenario going on," said Brian Harris, superintendent of Barrington 220 School District.

On Monday, Harris stood with superintendents from poorer school districts urging Gov. Rauner to sign SB 1, a bill that changes the funding formula to an evidence-based system which means lower-income districts, who don't have a strong property base, will no longer be short changed.

"The current state funding model Round Lake has lost over $18 million from 2012-2016," said Constance Collins, superintendent of the Round Lake Area School District 116.

However, Rauner said SB1 is nothing more than a pension bailout for CPS. He plans an amendatory veto that diverts money from CPS to other school districts.

"Chicago will not get the money, Decatur is going to get the money. And do you know how much more money Decatur teachers and students are going to get? $1.6 million per year. Think about that," Rauner said.

SB 1 supporters said the bill is not a CPS bailout.

"There are 268 districts that get more money per pupil than Chicago in this formula," said state Sen. Melinda Bush, D-Grayslake.

In a written response to the governor's plan for an amendatory veto, CPS calls it illegal and a stunt.

Mayor Rahm Emanuel said it's unfortunate that Rauner is pursuing a political path rather than a productive one.