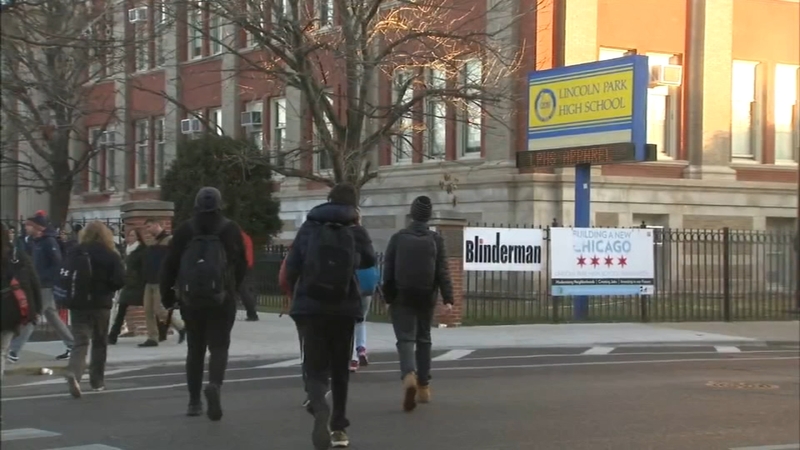 CHICAGO (WLS) -- Extra security was put in place at Lincoln Park High School Thursday because of a threat found written on a bathroom wall.

Added layers of security made it take longer to get into school, with hundreds going through metal detectors and X-ray machines to scan students' personal items.

"In the email, he said that everybody's gonna have to go through with their book bags, and so like, basically everything is going to go through the metal detector," said student Jonathan Clark. "They're gonna of course have police there on site to make sure everyone is safe."

The principal of the North Side school sent an email alert to parents, students and staff about a potential threat discovered yesterday morning inside a bathroom.

Chicago police tell ABC7 that the threat was graffiti in a bathroom which referenced harm would come to students on Friday's date.

"I don't like it," said student Sabrina Rodgers. "It's sort of weird how people would do this as a joke even though things going on around the world. It's not funny to joke about. It's just really insensitive to the actual victims."

But police and CPS did not take it as a joke. School officials said they take all threats very seriously and they've added more security including plain clothes officers to the school starting Thursday.

"My son's been here since freshman year," said parent Kimberly Wash. "He's a senior now so I feel confident in the security staff here."

Meanwhile, the date of the potential threat matches a day of tragic significance. Friday marks the anniversary of the horror in Newtown, Connecticut.

Back on December 14, 2012, a gunman killed 20 children between the ages of six and seven years old at Sandy Hook Elementary School, along with six adult staff members. He then took his own life.

It's a date not lost on students.

"My teachers tell me to be brave for everybody," said student Saniya St. Clair. "My, like you know, peers are also kinda scared, but we're gonna be brave."

Beyond threat on the wall, police said they haven't found any additional evidence that there is an imminent threat.