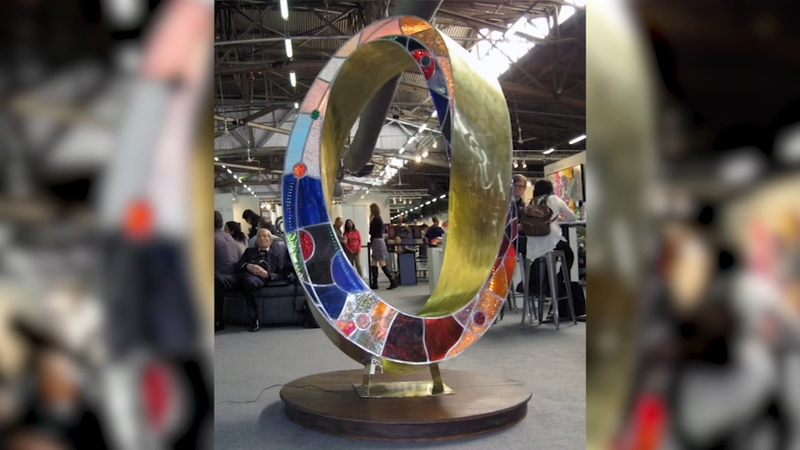 CHICAGO (WLS) -- Thieves have stolen a sculpture that had been prominently displayed in two Chicago neighborhoods.

Bulgarian-born Plamen Yordanov has been an artist his whole life. His work has been displayed in Europe and in the United States. It took the 57 year old months to complete a sculpture called "Light Infinity" a three dimensional 300-pound piece that was a fixture in New York City, Lincoln Park and most recently Bridgeport for several months.

"It was brass and stain glass with lights inside," said Yordanov.

For the past month, the unique sculpture was locked up in the basement of a burnt out Englewood church. It is where Yordanov is setting up shop as his art studio. He and his wife are trying to convert the old church into an art center. Wednesday, the couple was doing yard work out front when a van pulled up, men got out and quickly stole the big sculpture out of a back door.

"It was for a few seconds, a minute, when I run outside the van was gone, no track, no nothing, so I called police," said Yordanov.

The artist says police believe the sculpture was stolen as a piece of art worth over $70,000. Given that thieves had already stolen stain glass from the church, Yordanov and his wife have another theory.

"I don't know if it's fast cash for a few hundred pounds of brass," said Yordanov.

"I just hope they will change their thinking to appreciate a piece of art that an artist worked hard for," said Yordanov's wife, Ivliana Foghis.

The couple say they were warned about moving the art studio to Englewood. But, Yordanov and his wife say, despite what happened yesterday, they are determined to save this church and stay in the neighborhood. "Next year, in two years, I strongly believe this will be a nice art center here," said Yordanov.