WLS
By Jessica D'Onofrio
CHICAGO (WLS) -- Chicago police are looking for the gunman who opened fire in the CTA subway in the Loop Thursday, leaving one man wounded.

The shooting in the CTA subway happened in the Loop during the height of Thursday night's evening rush. It sent riders scrambling for cover in a pedestrian tunnel that connects the Red and Blue line Jackson stations.

Police responded in force after a man walked up to another man and fired twice with one bullet hitting the victim in the hip.

Friday morning, police believe the shooting was targeted and they are still looking for the gunman, who covered his face with a surgical mask.

"This area is probably one of the safest areas in the city," said CPD Chief of Patrol Fred Waller. "This is a targeted incident, so the riders should not feel any type of discomfort or any type of hesitation on riding the CTA."

The shooter fled westbound through the tunnel, police said, either going up to street level or getting on a train.

The victim is described as a man in his mid-20s. He was taken to a hospital and is expected to recover.

Police said he is conscious and talking but is not cooperating with investigators and has a history with CPD and known gang ties.

Based on his background coupled with high definition surveillance cameras and witness descriptions, they believe they will be able to track down the shooter.

"We have elderly people, children who ride the trains but themselves every day and people can get caught in the crossfire at anytime," said CTA rider Asia McFerren.

This latest act of violence has some riders concerned about their safety in the city and on the trains.

"It freaks me out a little bit, but not much I can do except take it when I have to," said CTA rider Austin Schumann.

"I'll be 29 in January and it's like I have no kids and I refuse to raise a family here in Chicago," said CTA rider Travis Wade.
Report a correction or typo
Related topics:
chicagoloopchicago shootingchicago violencectachicago police department
Copyright © 2021 WLS-TV. All Rights Reserved.
RELATED 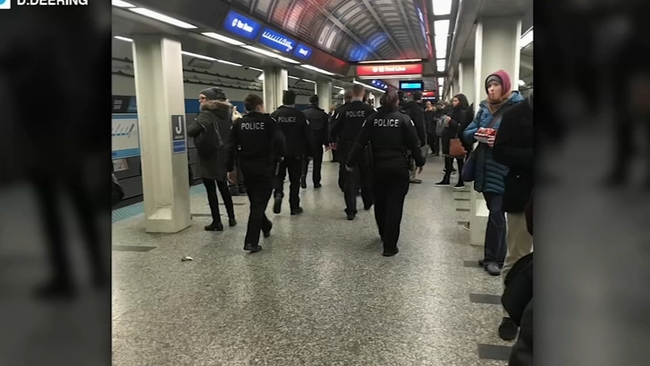