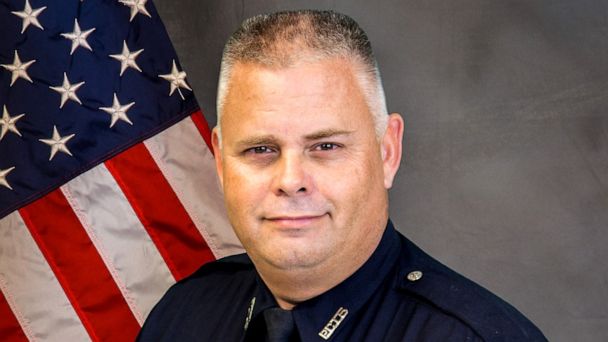 A search was on Sunday for a man who gunned down a Texas constable deputy with what investigators described as an "assault-type weapon" during a traffic stop near Houston.

Cpl. Charles Galloway, 47, of the Harris County Constable Precinct 5 office was shot multiple times while still seated in his patrol car and reportedly had no time to defend himself when the motorist he stopped got out of his car and opened fire without warning, authorities said.


"He was brutally murdered," Precinct 5 Constable Ted Heap said during a news conference early Sunday outside the Houston Hospital where Galloway was pronounced dead.

The shooting started about 12:45 a.m. Sunday when Galloway, a training officer, pulled over a newer-model white Toyota Avalon in a residential neighborhood of southwest Houston, according to Houston Police Chief Troy Finner.

"Witnesses described the suspect as a Hispanic male and said that he got out of his vehicle and immediately fired upon the deputy multiple times, striking him and then drove off," said Finner, adding that witnesses told investigators that the suspect was wielding an "assault-type weapon."

Heap added that Galloway "did not have an opportunity to respond or even defend himself with this brutal attack."

The gunman remained on the run Sunday and was the subject of a statewide search.


The deadly episode came during a string of law enforcement officer deaths in-the-line duty nationwide. On Friday night, a 22-year-old rookie New York City police officer was fatally shot and his partner was critically wounded when they responded to a domestic incident in Harlem.

On Dec. 29, Bradley, Illinois, Police Sgt. Marlene Rittmanic, 49, was fatally shot and her partner was wounded when they responded to a barking dog complaint at a hotel. Two people arrested in the case, including one who allegedly shot Rittmanic with her own gun, were arrested and are facing the death penalty if convicted.

Galloway's death comes about three months after Harris County Constable Precinct 4 deputy Kareem Atkins, 30, was shot to death in an ambush outside a Houston sports bar that left Atkins' partner wounded. A 19-year-old suspect was arrested in December and charged with capital murder.

"These are not assaults, these are not attacks, these are brutal, brutal murders. We have to put an end to this," Heap said. "We cannot have people like this on our streets. I don't want to raise my family, my grandchildren in a county where this type of crime is running rampant."

Heap nor Finner would comment on the reason Galloway, who was assigned to the toll road enforcement division, initiated the traffic stop.


Finner said his department's investigative and homicide units are leading the investigation.

"A message to this suspect, the best thing you can do is turn yourself in peacefully," Finner said.

Heap said Galloway is survived by a daughter and a sister. He said Galloway was a 12 1/2-year veteran of Precinct 5 and had voluntarily switched to a night shift position to become a training officer.

"There are a lot of very broken up officers who he (Galloway) meant a lot in their lives because he was the one sitting in the front seat with them," Heap said. "He was the one who was teaching them what to do and how to get home safely to their families."
Report a correction or typo
Related topics:
abc newsnational
Copyright © 2022 ABC News Internet Ventures.
TOP STORIES
Mayor Lightfoot announces changes to citywide curfew
Illinois reports 5,447 new COVID cases, zero deaths
Alleged Buffalo shooter's prior threat, hospital stay face scrutiny
Bicyclist injured in hit-and-run crash: Oak Park police
Chicago City Council overwhelmingly OKs compromise ward map
Cheney says GOP leaders 'enabled white nationalism' amid mass shooting
33 shot, 5 fatally, in weekend violence, Chicago police say
Show More
Man killed after being shot, run over by car on SW Side, police say
Arby's manager urinated in milkshakes for sexual gratification: police
Bloggers team up for Chicago home makeover
Oak Forest HS students raise $1K for daughter of alumni with cancer
Amber Heard tells jury Depp hallucinated at end of marriage
More TOP STORIES News