Tractor-trailer nearly misses traffic after careening off I-10 in Louisiana: VIDEO 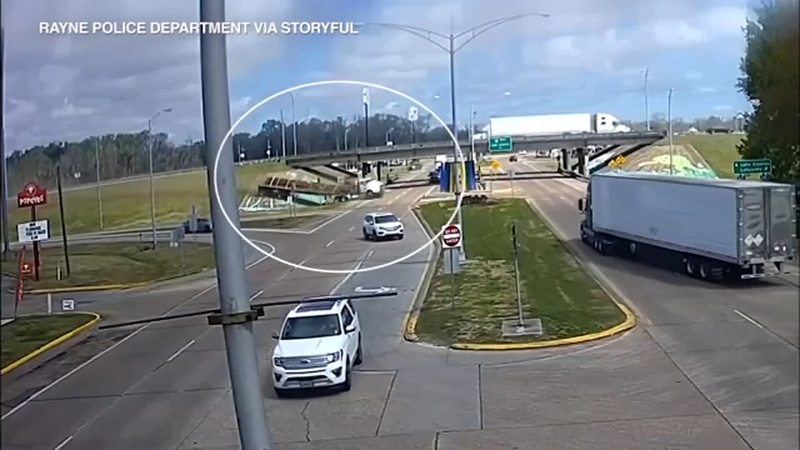 Tractor-trailer in near-miss with traffic after leaving interstate highway

RAYNE, La. -- St. Patrick's Day proved to be lucky for a truck driver in Louisiana.

Video shows the semi come off the roadway, go down an embankment and cross several lanes of traffic before hitting a post and catching fire.

That's not the lucky part. What was fortunate is, the truck did not hit any other trucks or cars.

RELATED: 6th person dies after fiery chain-reaction crashes on foggy I-57 in Missouri

This footage posted to Facebook by the Rayne Police Department shows the moment the tractor-trailer leaves the highway, crosses over lanes of traffic at speed and destroys a light post.

"The vehicle was traveling east on Interstate 10 when, for unknown reasons, it left the roadway, drove down an embankment, crossed The Boulevard and came to rest on private property. The tractor caught fire and the Rayne Volunteer Fire Department was called to the scene to extinguish the blaze.

"The driver of the tractor sustained minor injuries," the Rayne Police Department wrote in a Facebook post.

RELATED: 13-year-old was driving truck in fiery crash with University of the Southwest bus, NTSB says

The accident is under investigation.