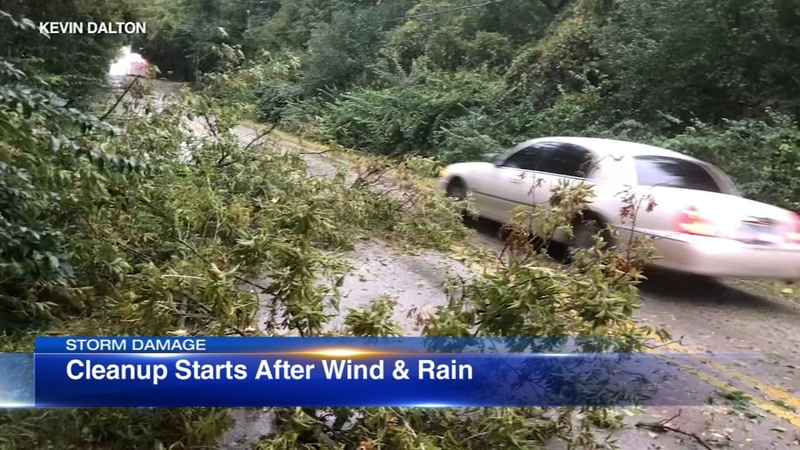 HUNTLEY, Ill. (WLS) -- A lot of suburban families are cleaning up after Tuesday's damaging storms.

Some 8,000 people are without power in the northwest suburbs. There are a lot of trees and power lines down in Huntley, including a tree limb that came crashing into a man's bedroom.

The chain saws and the wood chippers were overdrive Wednesday morning to clean up the mess from the 70 mile-per-hour winds in Huntley.

Vincent Nuccio came home to more than just branches in his front lawn. A massive tree limb crashed through his roof and ended up dangling over his bed.

"It was a foot off the bed, the tree was that close to my bed," Nuccio said. "There was something telling me, 'Hey, get up or do something or take a nap and I got up and did something.'"

He's one of more than 8,000 ComEd customers waiting for their power to be restored after the powerful storm tore many live power lines right from the poles.

"We've been improvising," said Huntley resident Stuart Pace. "I had my dad, he dropped off ice over there at that road. I walked over there and grab a bunch of ice and keep the food good."

Luckily, everyone was pitching in on the cleanup effort. Huntley police said much of the major clearing has been done, but the full cleanup will still take a while.

Charles Akerberg's lived here for 66 years and he said this is the worst storm damage he's ever seen.

"The rain was totally horizontal," Akerberg said. "It was so thick and heavy, I couldn't see the neighbors' house out of the window."

Huntley police said eight homes had significant damage and one home has been deemed uninhabitable.